The 1872 Owens Valley earthquake – also known as the Lone Pine earthquake – struck on March 26 at 02:30 local time in the Owens Valley (California, along the east side of the Sierra Nevada), with the epicenter near the town of Lone Pine. Its magnitude has been estimated at Mw 7.4 to 7.9, with a maximum Mercalli Intensity of X (Extreme). It was one of the largest earthquakes to hit California in recorded history and was similar in size to the 1906 San Francisco earthquake. Twenty-seven people were killed and fifty-six were injured.

The earthquake resulted from sudden vertical movement of 15 to 20 feet (4.6 to 6.1 m) and right-lateral movement of 35 to 40 feet (11 to 12 m) on the Lone Pine Fault and part of the Owens Valley Fault. These faults are part of a twin system of normal faults that run along the base of two parallel mountain ranges; the Sierra Nevada on the west and the Inyo Mountains on the east of the Owens Valley. It created fault scarps from north of Big Pine, 55 miles (89 km) north of Lone Pine, to Haiwee Reservoir (30 miles (48 km)) south of Lone Pine. 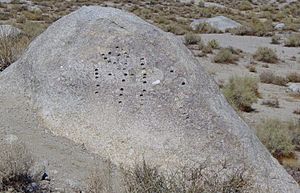 Scarp boulder that has been studied

The earthquake occurred on a Tuesday morning and leveled almost all the buildings in Lone Pine and nearby settlements. Of the estimated 250–300 inhabitants of Lone Pine, 27 are known to have perished and 52 of the 59 houses were destroyed. One report states that the main buildings were thrown down in almost every town in Inyo County. About 130 kilometers (81 mi) south of Lone Pine, at Indian Wells, adobe houses sustained cracks. Property loss has been estimated at $250,000 (equivalent to $4,431,944 in 2018). As in many earthquakes, adobe, stone and masonry structures fared worse than wooden ones which prompted the closing of nearby Camp Independence which was an adobe structure destroyed in the quake.

The quake was felt strongly as far away as Sacramento, where citizens were startled out of bed and into the streets. Giant rockslides in what is now Yosemite National Park woke naturalist John Muir, then living in Yosemite Valley, who reportedly ran out of his cabin shouting, "A noble earthquake!" and promptly made a moonlit survey of the fresh talus piles. This earthquake stopped clocks and awakened people in San Diego to the south, Red Bluff, to the north, and Elko, Nevada, to the east. The shock was felt over most of California and much of Nevada. Thousands of aftershocks occurred, some severe. 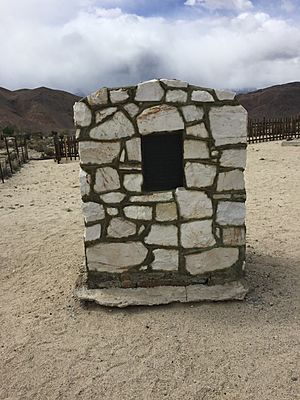 Original plaque and memorial for the 1872 earthquake 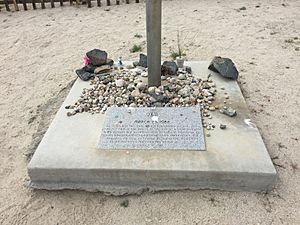 The common grave of the earthquake's victims is now registered as California Historical Landmark #507.

Grave of 1872 Earthquake Victims is a California Historical Landmark number 507, assigned on July 31, 1953.

NO. 507 GRAVE OF 1872 EARTHQUAKE VICTIMS- On March 26, 1872, a major earthquake shook Owens Valley, nearly destroying the town of Lone Pine. About fourteen of its victims (the exact number is not known) were interred in a common grave, enclosed by this fence.

All content from Kiddle encyclopedia articles (including the article images and facts) can be freely used under Attribution-ShareAlike license, unless stated otherwise. Cite this article:
1872 Owens Valley earthquake Facts for Kids. Kiddle Encyclopedia.