A seismic scale is used to describe the strength or "size" of an earthquake. There are two types of scales: intensity scales that describe the intensity or severity of ground shaking (quaking) at a given location, and magnitude scales that measure the strength of the seismic event itself, usually based on an instrumental record. The intensity and nature of ground shaking depends on the local geology; at a given locality the intensity of shaking depends on the magnitude and distance of the seismic event.

The Earth's crust is stressed by tectonic forces. When this stress becomes great enough to rupture the crust, or to overcome the friction that prevents one block of crust from slipping past another, energy is released, some of it in the form of various kinds of seismic waves that cause ground-shaking, or quaking.

Magnitude is an estimate of the relative "size" or strength of an earthquake, and thus its potential for causing ground-shaking. It is "approximately related to the released seismic energy." 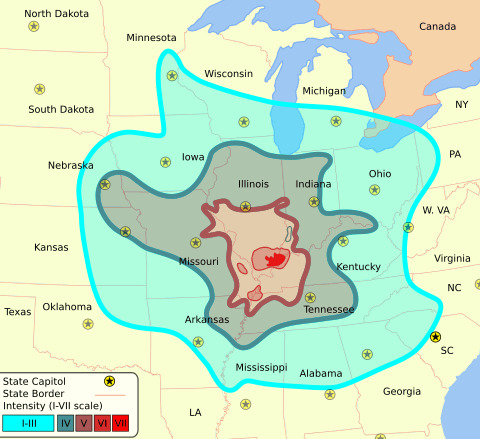 Isoseismal map for the 1968 Illinois earthquake

Intensity refers to the strength or force of shaking at a given location, and can be related to the peak ground velocity. Prior to the development of strong-motion accelerometers that can measure peak ground speed directly, the intensity of the earth-shaking was estimated on the basis of the observed effects (damage), as categorized on various intensity scales. With an isoseismal map of the observed intensities (see illustration) an earthquake's magnitude can be estimated from both the maximum intensity observed (usually but not always near the epicenter), and from the extent of the area where the earthquake was felt.

The intensity of local ground-shaking depends on several factors besides the magnitude of the earthquake, one of the most important being soil conditions. For instance, thick layers of soft soil (such as fill) can amplify seismic waves, often at a considerable distance from the source, while sedimentary basins will often resonate, increasing the duration of shaking. This is why, in the 1989 Loma Prieta earthquake, the Marina district of San Francisco was one of the most damaged areas, though it was nearly 100 km from the epicenter. Geological structures were also significant, such as where seismic waves passing under the south end of San Francisco Bay reflected off the base of the Earth's crust towards San Francisco and Oakland. A similar effect channeled seismic waves between the other major faults in the area.

All content from Kiddle encyclopedia articles (including the article images and facts) can be freely used under Attribution-ShareAlike license, unless stated otherwise. Cite this article:
Seismic magnitude scales Facts for Kids. Kiddle Encyclopedia.