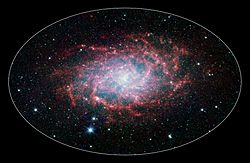 Infrared image of M33 taken with the Spitzer Space Telescope 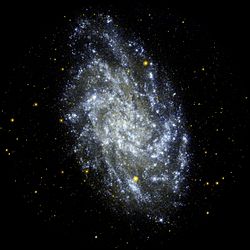 The Triangulum galaxy is a spiral galaxy approximately 3 million light years (ly) from Earth in the constellation Triangulum. The Triangulum galaxy is the third-largest member of the Local Group of galaxies, which includes the Milky Way galaxy, the Andromeda galaxy and about 50 other smaller galaxies. It is one of the most distant permanent objects that can be viewed with the naked eye.

It is catalogued as Messier 33 or NGC 598, and is sometimes informally referred to as the Pinwheel galaxy, a nickname it shares with Messier 101.

All content from Kiddle encyclopedia articles (including the article images and facts) can be freely used under Attribution-ShareAlike license, unless stated otherwise. Cite this article:
Triangulum galaxy Facts for Kids. Kiddle Encyclopedia.