Tulare County ( too-LAIR-ee) is a county in the U.S. state of California. As of the 2010 census, the population was 442,179. Its county seat is Visalia. The county is named for Tulare Lake, once the largest freshwater lake west of the Great Lakes. Drained for agricultural development, the site is now in Kings County, which was created in 1893 from the western portion of the formerly larger Tulare County.

Sequoia National Park is located in the county, as are part of Kings Canyon National Park, in its northeast corner (shared with Fresno County), and part of Mount Whitney, on its eastern border (shared with Inyo County). As of the 2010 census, the population was 442,179, up from 368,021 at the 2000 census. 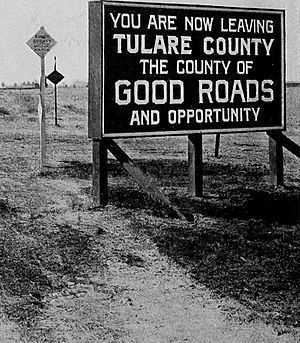 The land was occupied for thousands of years by varying cultures of indigenous peoples. Beginning in the eighteenth century, Spain established missions to colonize California and convert the American Indians to Christianity. Comandante Pedro Fages, while hunting for deserters in the Central Valley in 1772, discovered a great lake surrounded by marshes and filled with rushes; he named it Los Tules (the tules). It is from this lake that the county derives its name. The root of the name Tulare is found in the Nahuatl word tullin, designating cattail or similar reeds.

After Mexico achieved independence, it continued to rule California. After the Mexican Cession and the Treaty of Guadalupe Hidalgo in 1848, the area became part of the United States. Tulare County was soon formed from parts of Mariposa County only 4 years later in 1852. There were two early attempts to split off a new Buena Vista County in 1855, and Coso County in 1864, but both failed. Parts of the county's territory were given to Fresno County in 1856, to Kern County and to Inyo County in 1866 and to Kings County in 1893.

The infectious disease Tularemia caused by the bacterium Francisella tularensis is named after Tulare County.

In 1908 Colonel Allen Allensworth and associates founded Allensworth as a black farming community. They intended to develop a place where African Americans could thrive free of white discrimination. It was the only community in California founded, financed and governed by African Americans. While its first years were highly successful, the community encountered environmental problems from dropping water tables which eventually caused it to fail. Today the historic area is preserved as the Colonel Allensworth State Historic Park, which is listed on the National Register of Historic Places. 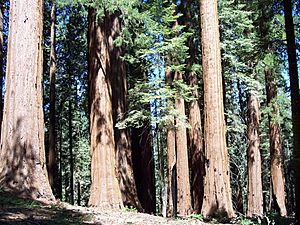 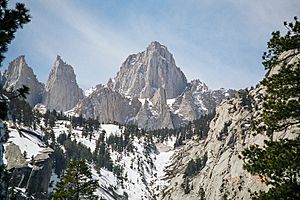 Mount Whitney is located on the Tulare-Inyo County line

Sequoia National Park is a national park in the southern Sierra Nevada, east of Visalia. It was established in 1890 as the second U.S. national park, after Yellowstone. The park spans 404,051 acres (1,635.14 km2). Encompassing a vertical relief of nearly 13,000 feet (3,962 m), the park contains among its natural resources the highest point in the contiguous 48 United States, Mount Whitney, at 14,505 feet (4,421 m) above sea level. The park is south of and contiguous with Kings Canyon National Park; the two are administered by the National Park Service as one unit, called Sequoia and Kings Canyon National Parks.

The cities of Tulare, Porterville, and Visalia have their own local bus services.

The nearest full operation commercial airports are Bakersfield's Meadows Field Airport to the South, and Fresno's Fresno Yosemite International Airport to the North.

The population ranking of the following table is based on the 2010 census of Tulare County.

All content from Kiddle encyclopedia articles (including the article images and facts) can be freely used under Attribution-ShareAlike license, unless stated otherwise. Cite this article:
Tulare County, California Facts for Kids. Kiddle Encyclopedia.