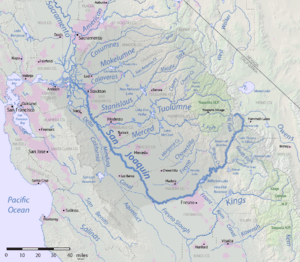 The San Joaquin River and its tributaries, showing the extent of the valley.

The San Joaquin Valley ( SAN-_-WHAH-keen) is the area of the Central Valley of the U.S. state of California that lies south of the Sacramento–San Joaquin River Delta and is drained by the San Joaquin River. It comprises seven counties of Northern and one of Southern California, including, in the north, all of San Joaquin and Kings counties, most of Stanislaus, Merced, and Fresno counties, and parts of Madera and Tulare counties, along with a majority of Kern County, in Southern California. Although the valley is predominantly rural, it does contain urban centers such as Fresno, Bakersfield, Stockton, Modesto, Tulare, Visalia, and Merced.

The San Joaquin Valley was originally inhabited by the Yokuts and Miwok peoples. The first European to enter the valley was Pedro Fages in 1772. 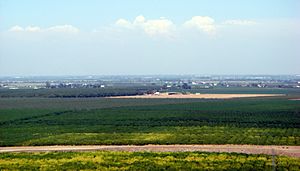 The San Joaquin Valley extends from the Sacramento–San Joaquin River Delta in the north to the Tehachapi Mountains in the south, and from the various California coastal ranges (from the Diablo Range in the north to the Temblor Range in the south) in the west to the Sierra Nevada in the east. Unlike the Sacramento Valley, the river system for which the San Joaquin Valley is named does not extend very far along the valley. Most of the valley south of Fresno, instead, drains into Tulare Lake, which no longer exists continuously due to diversion of its sources. The valley's primary river is the San Joaquin, which drains north through about half of the valley into the Sacramento–San Joaquin River Delta. The Kings and Kern Rivers are in the southern endorheic basin of the valley, all of which have been largely diverted for agricultural uses and are mostly dry in their lower reaches.

The San Joaquin Valley began to form about 66 million years ago during the early Paleocene era. Broad fluctuations in the sea level caused various areas of the valley to be flooded with ocean water for the next 60 million years. About 5 million years ago, the marine outlets began to close due to uplift of the coastal ranges and the deposition of sediment in the valley. Starting 2 million years ago, a series of glacial episodes periodically caused much of the valley to become a fresh water lake. Lake Corcoran was the last widespread lake to fill the valley about 700,000 years ago. At the beginning of the Holocene there were three major lakes remaining in the southern part of the Valley, Tulare Lake, Buena Vista Lake and Kern Lake. In the late 19th and in the 20th century, agricultural diversion of the Kern River eventually dried out these lakes. Today, only a fragment of Buena Vista Lake remains as two small lakes Lake Webb and Lake Evans in a portion of the former Buena Vista Lakebed

The San Joaquin Valley has hot, dry summers and has historically enjoyed cool rainy winters characterized by dense tule fog. Its rainy season normally runs from November through April, but since 2011 when a drought became evident it generally received minimal to no rain at all. The drought was still extant by mid-August 2014 with scientists saying it would likely continue indefinitely, for anywhere from several years to several decades to come.

In August 2015, the Director of the California Department of Water Resources stated, "Because of increased pumping, groundwater levels are reaching record lows—up to 100 feet lower than previous records." Research from NASA shows that parts of the San Joaquin Valley sank as much as 8 inches (0.20 m) in a four-month period, and land near Corcoran sank 13 inches (0.33 m) in 8 months. The sinking has destroyed thousands of groundwater well casings and has the potential to damage aqueducts, roads, bridges, and flood-control structures. In the long term, the subsidence caused by extracting groundwater could irreversibly reduce the underground aquifer's water storage capacity.

The total population of the eight counties comprising the San Joaquin Valley at the time of the 2010 U.S. Census was 3,971,659.

Interstate 5 (I-5) and State Route 99 (SR 99, or just "99") each run along for almost the entire length of the San Joaquin Valley. I-5 runs in the western part of the valley, bypassing the major population centers (including Fresno, currently the largest U.S. city without an Interstate highway), while 99 runs through them. Both highways then merge at the southern end of valley en route to Los Angeles. When the Interstate Highway System was created in the 1950s, the decision was made to build I-5 as an entirely then-new freeway bypass instead of upgrading the then-existing U.S. 99. Since then, state and federal representatives have pushed to convert 99 to an Interstate, although this cannot occur until all of the portions of 99 between I-5 and the U.S. 50 junction in Sacramento are upgraded to freeway standards.

State Route 58 (SR 58), which is a freeway in Bakersfield and along most of its route until its terminus in Barstow, is an extremely important and very heavily traveled route for truckers from the valley and the Bay Area who want to cross the Sierra Nevada and leave California (by way of Interstate 15 or Interstate 40) without having to climb Donner Pass or brave the traffic congestion of Los Angeles. Proposals have also been made to designate this highway as a western extension of I-40 once the entirety of the route between Mojave and Barstow has been upgraded to a freeway. This would provide an Interstate connection for Bakersfield, currently the second-largest U.S. city without an Interstate. The most recent additions to this system are State Highway 168 and 180. Route 168 begins at Fresno on Route 180 linking to Huntington Lake in the mountains through Clovis and many smaller communities. This route is part of the California Freeway and Expressway System[2] and is eligible for the State Scenic Highway System[3]. State Route 180 is a state highway in California, United States, which runs through the heart of the San Joaquin Valley from Mendota through Fresno to Kings Canyon National Park. A short piece near the eastern end, through the Grant Grove section of Kings Canyon National Park, is not state-maintained. The part east of unbuilt State Route 65 near Minkler is eligible for the State Scenic Highway System; the road east of Dunlap is the Kings Canyon Scenic Byway, a Forest Service Byway.

Other important highways in the valley include State Route 46 (SR 46) and State Route 41 (SR 41), which respectively link the California Central Coast with Bakersfield and Fresno; State Route 33, which runs south to north along the valley's western rim and provides a connection to Ventura and Santa Barbara over the Santa Ynez Mountains; and State Route 152 (SR 152), an important commuter route linking Silicon Valley with its fast-growing exurbs such as Los Banos.

Amtrak provides rail service through the San Joaquin Valley. There are also plans for a high-speed rail line that will link the valley with San Francisco, Los Angeles, Sacramento, and San Diego. While many valley politicians and businesses are eager supporters of the line, eager to provide better connections to the larger and wealthier cities to the north and south, factions in cities such as Modesto and Stockton have opposed the line due to adverse impacts such as increased noise.

San Joaquin Valley Fever is one common term for coccidioidomycosis, a fungal infection caused by Coccidioides immitis through the inhalation of airborne dust or dirt. The valley is just one of the areas in the southwestern United States where the illness is endemic due to C. immitis residing in the soil.

Cities with more than 500,000 inhabitants

Cities with fewer than 20,000 inhabitants 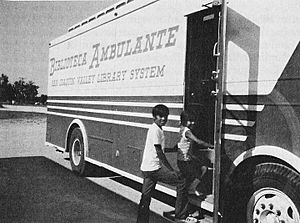 All content from Kiddle encyclopedia articles (including the article images and facts) can be freely used under Attribution-ShareAlike license, unless stated otherwise. Cite this article:
San Joaquin Valley Facts for Kids. Kiddle Encyclopedia.