Kids Encyclopedia Facts
For the community in Plumas County formerly with this name, see Cromberg, California.

Taft (formerly Moron, Moro, and Siding Number Two) is a city in the foothills at the extreme southwestern edge of the San Joaquin Valley, in Kern County, California. Taft is located 32 miles (51 km) west-southwest of Bakersfield, at an elevation of 955 feet (291 m). The population was 9,327 at the 2010 census. According to the United States Census Bureau, the city has a total area of 15.1 square miles (39.1 km2).

It was named for President William H. Taft in 1909.

The town began as Siding Number Two on the Sunset Railroad. According to a display at the West Kern Oil Museum, local residents asked the Southern Pacific Railroad if the station could be named Moro when the rails arrived in about 1900, but a railroad official declined because the name would be too easily confused with the coastal town of Morro Bay. Instead, the railroad directed the station be called Moron, a word which as yet had no association with stupidity. Pictures of local businesses, including the Moron Pharmacy, hang in the museum.

After a fire burned much of the town, the name was changed to Taft in honor of William Howard Taft. 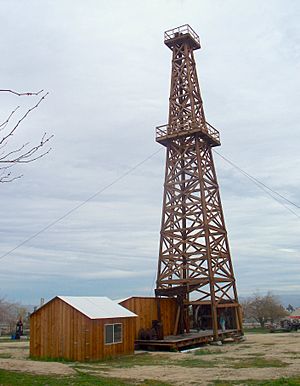 1917 wooden derrick. This oil well produced into the 1980s, and the operator then donated the old derrick and 3 acres of land to found the West Kern Oil Museum.

Taft is situated in a major petroleum and natural gas production region in California and is one of the few remaining towns in the United States which exist exclusively because of nearby oil reserves. The discovery of oil in the region occurred in the late 19th century near Maricopa, seven miles (11 km) south of Taft. Many other oil and gas accumulations were discovered around Taft during the early-to-mid-20th century, notably the Midway field (near Fellows, California), Sunset field (later found to be part of the same trend, accounting for the modern combined name of Midway-Sunset), and the Buena Vista. The town is built directly between these two huge fields. The operational activities within these fields, as well as Occidental Petroleum's Elk Hills Oil Field north of Taft, have been the economic life blood of the town for over 100 years.

The super-giant Midway-Sunset field has produced approximately 2,800,000,000 barrels (450,000,000 m3) of crude oil, most of it heavy gravity (13-14 degrees API). Enhanced oil recovery operations in the form of steam production and injection have been used on the thick viscous crude oil of the Midway-Sunset field since the mid-to-late-1960s. The reservoirs of the Midway-Sunset field are composited layers of mostly unconsolidated sandstones of late Miocene age, shallowly buried. The shallow burial depth and ideal nature of the sandstones make them almost perfectly suited for steam injection. As a result, the amount of oil that can be recovered has greatly increased.

Standard Oil, later the Standard Oil Company of California (modern Chevron), made Taft its corporate operational headquarters. At one time it is reported that as many as 6,000 inhabitants of Taft were employed by Standard Oil. The hub of this activity was "11-C Camp", so named due to its township location in section 11 and designated "township C" by Standard's mapping department. Within the camp was everything imaginable to run a large oil and gas company: a rail spur from the line running through Taft, steel and timber for derrick construction and maintenance, pipe, valves, numerous offices, an expansive and highly specialized machine shop, a plethora of supply shops, the car and truck fleet, bunkhouses for workers, and dozens of company homes for employees. In its heyday, 11-C camp sported very nice facilities including a large playground, baseball field, tennis courts, a large swimming pool, a cook-house open to the public, beautifully landscaped grounds, a clubhouse with a television, pool and card tables, and an ice-cream stand. The huge complex gradually closed down over a period of many years. In 1968 Standard Oil of California moved its accounting and finance offices to Concord, California. In the late 1980s the machine shop was closed and auctioned, signaling the end of the 11-C Camp era.

Many other oil companies had operations in the area, including larger companies such as Shell, Texaco, Exxon, Mobil, Gulf, and Arco, as well as smaller operations (but with a large local presence) such as Santa Fe Energy, Berry Petroleum, Tannehill, M.H. Whittier, and lately Plains Exploration & Production. In the mid-1990s, according to California's Division of Oil, Gas, and Geothermal Resources (DOGGR), there were 68 operating companies working the Midway-Sunset field alone. While the names of most of these companies have changed, due to mergers, acquisitions, and liquidations, the production activities have been continuous.

In celebration of its oil heritage, Taft holds its "Oildorado" festival every five years. Oildorado was first started in 1930 (see below) and was held intermittently before then.

In the early days of oil exploration and production, long before the advent of modern blowout preventions, gushers were the norm. Although there were many, the Lakeview Gusher was the grand-daddy of them all, producing 100,000 barrels (16,000 m3) of oil per day at its peak. In all, the Lakeview No.1 produced about nine million barrels of oil (a very respectable cumulative production for a single well in this area). The well and its State historical marker can be found along the Petroleum Club road, just off SR 33 south of town.

Taft was also the site of a military airfield, Gardner Field, which was used to train pilots during World War II. After the base was closed its abandoned airstrip served as a clandestine dragstrip for many years.

Today, the railroad, originally built to export crude oil and import drinking water, is gone but the area still has a significant oil industry presence.

A private prison, operated by Management & Training Corporation under contract to the U.S. Bureau of Prisons, is located on Cadet Road south of town. There is a large, modern high school serving area students. The West Kern Oil Museum, at 1168 Wood Street, has vast holdings including pumps, fire apparatus, trucks, a historic wooden derrick, photos, models, and extensive displays of local history back to Indian times. The town's newspaper, the Midway Driller, was reputed to be the oldest daily newspaper in California. On or about 2005, the "Daily Midway Driller" became the "Midway Driller" and is now published on Tuesdays and Fridays. The town's second weekly newspaper, the Taft Independent, began publication on July 4, 2006.

The city, which has experienced the ups and downs of the boom and bust cycle of the oil industry, has recently experienced new development and business growth with the opening of a 3 story, 70 room Taft Inn Best Western Plus Hotel, the opening of a craft brewery, Black Gold Brewing Company, in the historic downtown on Center Street, the reopening of the historic Taft Fox Theater, the opening of The Bank, a bar and grill in the historic Taft State Bank Building, a new Taco Bell restaurant and many more "mom and pop" small businesses. The city owns a 46-acre former BNSF railroad property in the center of town which features the West Kern Oilworker's Monument, a 37 ft. tall world-class all bronze sculpture that features several human figures displayed on an oil derrick by artist Benjamin Victor that was paid for with donations from local residents, visitors and several oil companies. The railroad property is part of a redevelopment project that the city is using to attract new businesses, housing and commercial office space.

Taft-Kern County Airport is located at the east edge of town and is a favorite for parachutists in Kern County and the South San Joaquin Valley.

The Los Angeles Dodgers’ Vin Scully—the “man with the golden voice”—was in Taft, California on May 9, 2015 to commemorate a local baseball and wiffle ball field that bears his name. The town buzzed with excitement as the crowd, sporting their Dodger best, welcomed Vin. Newly constructed Scully Field will serve as an important gathering place for the community, providing young boys and girls the opportunity to play ball on their own replica of Dodger Stadium. Taft too made a big impression on Scully. He noted of the community in an interview with MLB, “It’s got that real American feel of small town USA.… You immediately felt much like at home.” Majority Leader McCarthy had this to say about the Dodger’s legend and his visit to Taft: “For Vin Scully to be here to dedicate it is pretty exciting, because here we’ve grown up listening to that voice call all those important games. I met Vin a couple of years ago and when they were building this stadium for the kids and wanted to name it after Vin Scully—we just contacted him and he said, ‘Sure, I’ll come up and be part of it,’ and for him and his wife Sandi to come up here means a lot to the thousands of people here… They will talk for generations about the Vin Scully Field and the day he was here.” 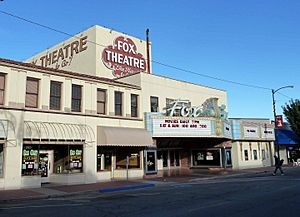 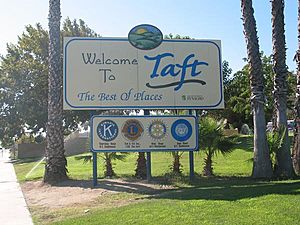 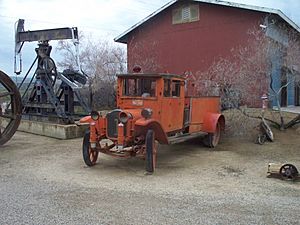 Every 5 years during October, Taft holds a birthday celebration. This event began as a parade and civic luncheon, commemorating Taft's 20th birthday in November 1930. These celebrations were held every five years until World War II, during which time none were held.

After the war, in 1946, the celebrations began again and the Taft District Chamber of Commerce made them permanent. A contest was held to choose a name for the event and "Oildorado" was chosen, having been submitted by W.A. Poff.

Today, Oildorado is a week long celebration during which many events are held. Oildorado is an ongoing testimony for Taft as a certified "Oil Town" -its origins owing solely to oil production and exploration, a rare distinction among any town in the world. As such, there are several oilfield-type skill contests held during each Oildorado. These include or have included: welding, pipe threading and fitting, rod wrenching, various skill tests with a backhoe, and at least as late as 1965 a regular well-pulling contest with local well servicing rigs and crews. Understandably, due to safety and probably liability issues, the well-pulling contests ceased. Much more could be said of these various contests and their participants through the years, it being quite memorable for those who were there.

Additionally, there is a beauty pageant where an Oildorado Queen is selected, a facial hair growing contest, talent shows, barbecues, street fairs, parades, and in 2005, motocross races. People usually dress in cowboy boots and a cowboy hat throughout the week.

It is also customary for all men to grow facial hair during this time. If a man does not grow facial hair, he must pay for a permit and wear a bolo tie or lapel pin called a Smooth Puss Badge. If he is caught clean shaven without his badge he may be arrested by the Posse, a group of men dressed in western garb, sporting pistols and rifles filled with blanks and, of course, facial hair. The man will be placed in a jail truck called "The Hoosegow" and driven around town for an hour for all to see. Warrants may also be purchased to have somebody else arrested and placed in The Hoosegow.

The Posse is overseen by the Grand Marshal. The group patrols the streets, schools, and businesses and engages in make-believe shootouts with the Bandits, (the Wooden Nickel Gang) who customarily wear bandanna masks on their faces. 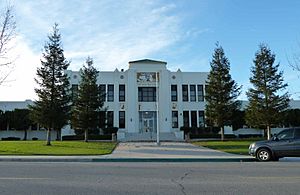 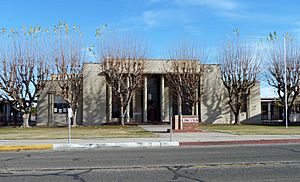 Taft College is the community college.

Taft-Kern County Airport is located at the east edge of town, and is a favorite for parachutists in Kern County and the South San Joaquin Valley.

All content from Kiddle encyclopedia articles (including the article images and facts) can be freely used under Attribution-ShareAlike license, unless stated otherwise. Cite this article:
Taft, California Facts for Kids. Kiddle Encyclopedia.