Morro Bay is an incorporated waterfront city in San Luis Obispo County, California located along California State Route 1 on California's Central Coast. As of the 2010 census, the city population was 10,234, down from 10,350 at the 2000 census. 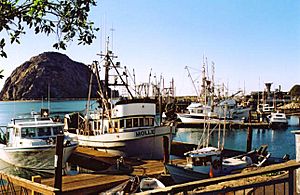 The boat docks of Morro Bay

The prehistory of Morro Bay relates to Chumash settlement, particularly near the mouth of Morro Creek. At least as early as the Millingstone Horizon thousands of years before present, there was an extensive settlement along the banks and terraces above Morro Creek. A tribal site on present-day Morro Bay was named tsɨtqawɨ, Obispeño for "Place of the Dogs".

The first European land exploration of Alta California, the Spanish Portola expedition, came down Los Osos Valley and camped near today's Morro Bay on September 8, 1769. Franciscan missionary and expedition member Juan Crespi noted in his diary that "we saw a great rock in the form of a round morro".

Morro Rock later gave its name to the town. The descriptive term morro is common to the Spanish, Portuguese, and Italian languages, and the word is part of many place names where there is a distinctive and prominent hill-shaped rock formation. Note that the similar Spanish descriptive word "moro" indicates a bluish color rather than a shape.

The first recorded Filipinos to visit America arrived at Morro Bay on October 18, 1587, from the Spanish galleon Nuestra Señora de la Esperanza; one of whom was killed by local Native Americans while scouting ahead.

While governed by Mexico, large land grants split the surrounding area into cattle and dairy ranchos. These ranchos needed shipping to bring in dry goods and to carry their crops, animals, and other farm products to cities.

The town of Morro Bay was founded by Franklin Riley in 1870 as a port for the export of dairy and ranch products. He was instrumental in the building of a wharf which has now become the Embarcadero. During the 1870s, schooners could often be seen at the Embarcadero picking up wool, potatoes, barley, and dairy products.

A subspecies of butterfly, the "Morro Bay Blue" or " Morro Blue" (Icaricia icarioides moroensis) was first found at Morro beach, by the entomologist Robert F. Sternitzky, in June 1929.

During World War II, there was a U.S. Navy base, Amphibious Training Base Morro Bay on the north side of Morro Rock where sailors were trained to operate LCVPs. The breakwater on the southwest side of the Rock was built in 1944–45 to protect the LCVPs entering and leaving the harbor. Soldiers from Camp San Luis Obispo would come to Morro Bay and practice loading into the LCVPs.

In the 1940s, Morro Bay developed an abalone fishing industry; it peaked in 1957, and stocks of abalone have declined significantly due to overfishing. Halibut, sole, rockfish, albacore, and many other species are still caught by both commercial and sport vessels. In addition, oysters are aquacultured in the shallow back bay.

A portion of Morro Bay is also designated as a state and national bird sanctuary. It is also a state and national estuary. Much of Morro Bay is a state wildlife area where waterfowl hunting is conducted during the season and is one of the few areas in California where Pacific brant are pursued. In 2007, the California Fish and Game Commission designated Morro Bay as a marine protected area named the Morro Bay State Marine Reserve. 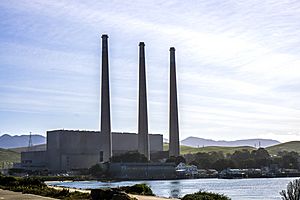 The Dynegy power plant, previously owned by Pacific Gas and Electric Co.(PG&E), Duke Energy, and LSPower (PG&E), has played a large role in Morro Bay, and in providing electricity to the Central Coast and the Central Valley of California (primarily Fresno and Bakersfield). The plant was built in the 1950s.

In 2018, a joint venture of German energy company EnBW and Seattle-based Trident Winds announced its plan to obtain the power plant's grid connection to connect a 650 MW floating offshore wind park comprising up to 100 floating wind turbines and a floating substation situated some 30 mi (48 km) off the coast. 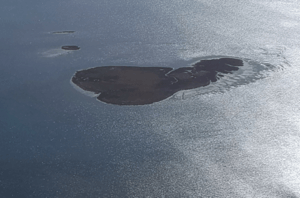 Morro Bay is the name of the large estuary that is situated along the northern shores of the bay itself. The larger bay on which the local area lies is Estero Bay, which also encompasses the communities of Cayucos and Los Osos. The city of Morro Bay is 20 km (12 mi) northwest of San Luis Obispo and is located on Highway 1. Los Osos Creek discharges into Morro Bay.

The town's most striking feature is Morro Rock, a 576 foot high volcanic plug which stands at the entrance to the harbor. Originally it was surrounded by water, but the northern channel was filled in to make the harbor. It was quarried from 1889 to 1969, and in 1968, it was designated a Historical Landmark.

The area around the base of Morro Rock is open to visitors, with parking lots and paths. However, climbing the rock itself is prohibited except with a permit, both due to risk of injury, and because it is a peregrine falcon reserve.

Morro Rock is one in a series of similar plugs that stretch in a line inland called the Nine Sisters. It is possible that the landscape moved over a volcanic hot spot through the ages.

Morro Bay is a natural embayment with an artificial harbor constructed by the U.S. Army Corps of Engineers. It is the only all-weather small craft commercial and recreational harbor between Santa Barbara and Monterey. Morro Rock was originally surrounded by water, but the Army built a large artificial breakwater and road across the north end of the harbor, linking Morro Rock and the mainland. Some of the rock used for this and for the artificial breakwaters was quarried from Morro Rock itself. Other rock was imported by barge from Catalina Island. The bay extends inland and parallels the shore for a distance of about 6.4 km (4 miles) south of its entrance at Morro Rock. Morro Bay is recognized for protection by the California Bays and Estuaries Policy.

Only relatively small craft are capable of passing the harbor channel. A large natural sandspit, augmented by breakwaters, protects the harbor from the Pacific Ocean to the west. At its northern end, remains of a bridge that used to connect the shore with the sandspit can be seen. Morro Bay Harbor's channel silts up and must be dredged every three to four years. Previously, the Shark Inlet connected the back bay to the ocean. Some have proposed reopening it to slow the sedimentation that is filling up the bay. There has also been work on reducing erosion in the Chorro Creek watershed to reduce the amount of sediment coming into the bay to form bottom layers of bay mud. Chorro Creek is the bay's largest tributary. It forms an estuary in the back bay between Morro Bay and Los Osos. The second largest tributary, and the only other significant one, is Los Osos Creek, which empties into the far south end of the back bay.

The United States Coast Guard regards the harbor as one of the most dangerous in the entire nation, while others put it in the top six on the West Coast of the United States. In 1995, the Army Corps of Engineering deepened and expanded the channel to improve safety. From 1979 to 1987, 21 lives were lost in boating accidents alone. Mariners are strongly urged to seek local advice prior to making use of the channel, especially when whitecaps or wind-blown water is evident or a small craft advisory is in effect. Deaths have resulted from sightseers and fisherman being swept off the rocks of the breakwater surrounding Morro Rock. They often approach too closely to the waves and are caught off guard when a big wave set comes in. The slippery and jagged rocks only add to the danger. Public access to the breakwater has been revoked and those who venture beyond the signs do so at their own peril.

The back bay, roughly anything south of the Morro Bay State Park Marina, is very shallow. However, there is some slightly deeper water in the channels. The largest channel continues from the bay's main channel, winding its way towards Los Osos, on the southern end of the bay. The second largest breaks off from the largest about halfway to Los Osos and takes an extremely windy route to the sandspit. A few small channels on the landward side formed by runoff meet the largest channel as well. The narrow, unmarked channels are very hard to navigate and are filled with eel grass, which can snag the boat or clog the propeller. They are easiest to find at low tide, but if the tide is too low, the boat may run aground because the channels are only a few feet deeper than the surrounding water. An alternative to searching for the channels is to cross at very high tide.

A panoramic view of Estero bay, with the town of Cayucos on the left, Morro Bay/Morro Rock center, and Point Buchon/Montana de Oro State Park on the right

Morro Bay experiences a mild warm-summer Mediterranean climate (Köppen Csb) characteristic of coastal California featuring dry, warm summers and wet, mild winters. The city is located next to the Pacific Ocean, which helps moderate temperatures and create an overall pleasant mild year-round climate, resulting in warmer winters and cooler summers compared with places farther inland, such as Atascadero. Summers in Morro Bay are cool for a city located on the 35th parallel north latitude, with July averaging around 60 °F (16 °C). Winters are mild, with January averaging at 55 °F (13 °C) with around 8 days of measurable precipitation.

Morro Bay High School and Del Mar Elementary are the only schools in Morro Bay, California that offers education for grade level K-5th and 9th −12th .

Tourism is the city's largest industry, coexisting with the town's commercial fishery. A number of tourist attractions are found along the shoreline and the streets closest to it, especially the Embarcadero, including restaurants, shops and parks. 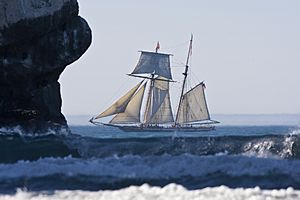 The most popular beach is on the north side of Morro Rock, north of the harbor. There are also excellent beaches north and south of the town which are owned by the State of California.

In the United States House of Representatives, Morro Bay is in California's 24th congressional district, which has a Cook PVI of D +4 and is represented by Salud Carbajal (D–Santa Barbara). 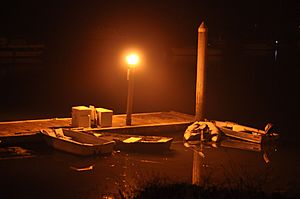 All content from Kiddle encyclopedia articles (including the article images and facts) can be freely used under Attribution-ShareAlike license, unless stated otherwise. Cite this article:
Morro Bay, California Facts for Kids. Kiddle Encyclopedia.