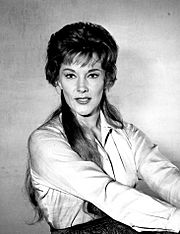 Wilma Jeanne Cooper (or just Jeanne Cooper; October 25, 1928 - May 8, 2013) was an American actress. She was best known for her Emmy Award-winning role as Katherine Chancellor on CBS' soap opera The Young and the Restless. She was a long serving television actress.

Cooper was born in Taft, California on October 25, 1928. She was raised in Bakersfield, California. Cooper was married to Harry Bernsen, Jr. from 1954 until they divorced in 1977. They had three children, including actor Corbin Bernsen. Cooper died on May 8, 2013 from complications from COPD in Los Angeles, California, aged 84.

All content from Kiddle encyclopedia articles (including the article images and facts) can be freely used under Attribution-ShareAlike license, unless stated otherwise. Cite this article:
Jeanne Cooper Facts for Kids. Kiddle Encyclopedia.