Hanford is an important commercial and cultural center in the south central San Joaquin Valley and is the county seat of Kings County, California. It is the principal city of the Hanford-Corcoran metropolitan area (MSA Code 25260), which encompasses all of Kings County, including the cities of Hanford and Corcoran. The ZIP Code is 93230 (93232 for post office boxes). The city of Hanford is surrounded by communities that do not fall within the city limits but use the same zip code. These communities include Grangeville, Hardwick and Home Garden.

Hanford has a climate typical of that of the San Joaquin Valley floor with hot, dry summers and cool winters characterized by dense Tule fog. The wetter season occurs from November through March. The average annual rainfall over the ten years from 1997/98 through 2006/07 was 8.97 inches (228 mm). The 30-year normal precipitation (1971–2000) is 8.29 inches.

The National Weather Service Forecast Office for the San Joaquin Valley is located in Hanford and includes a Doppler weather radar. Weather forecasts and climatological information for Hanford and the surrounding area are available from its official website.

The Hanford area was inhabited by the Tachi Yokut Indians for several thousand years prior to Euro-American contact. They occupied areas along watercourses such as creeks, springs and seep areas (such as sloughs), along perennial and seasonal drainages, as well as flat ridges and terraces. Therefore, the areas along streams are considered likely locations for prehistoric cultural resources. Permanent villages were usually placed on an elevation above the seasonal flood levels. Surrounding areas were used for hunting and seed, acorn, and grass gathering.

Hanford is named for James Madison Hanford, a railroad executive, after the Southern Pacific Railroad tracks were laid through a sheep camp in the year 1877. According to History of Kings County: "It was but a short step from sheep-camp to village and with the railroad as an attraction the village flourished and became a town within a few historic months."

In 1880, a dispute over land titles between settlers and the Southern Pacific Railroad resulted in a bloody gun battle on a farm 5.6 mi (9.0 km) northwest of Hanford that left seven men dead. This event became famous as the Mussel Slough Tragedy.

Several times, major fires destroyed much of the young community's business district. The need for fire protection led to the town becoming an incorporated city in 1891. Its first mayor was local resident Yamon LeBaron.

An electrical generating plant was built in 1891 by pioneering flour miller H.G. Lacey, bringing the first electric lights to the city. The Lacey Milling Company was still operating in Hanford in 2016.

The first public high school, Hanford Union High School, was started in 1892 with one teacher, W. S. Cranmer, and an average enrollment of fourteen.

When Kings County was created in 1893 from the western part of Tulare County, Hanford became its county seat.

In 1901, a restaurant called the Star opened on Sixth Street across from the Southern Pacific tracks. The Star Restaurant was still doing business at the same location in 2017.

Saloons flourished in Hanford's early days despite an anti-saloon movement until the town voted to become "dry" in 1912, eight years before nationwide Prohibition in the United States took effect.

15.5% of the populace lived below the poverty line.

Foreign-born residents accounted for 13.2% of Hanford's population and 28.3% spoke a language other than English at home.

There were 13,931 households out of which 42.3% had children under the age of 18 living with them, 53.9% were married couples living together, 15.4% had a female householder with no husband present, and 25.5% were non-families. 20.6% of all households were made up of individuals and 8.7% had someone living alone who was 65 years of age or older. The average household size was 2.93 and the average family size was 3.39.

Existing: Amtrak provides passenger rail service from Hanford station to the San Francisco Bay Area and Sacramento, and service to Southern California by a combination of rail and bus. Freight service is available from both the BNSF Railway and the San Joaquin Valley Railroad.

Proposed: The American Recovery and Reinvestment Act of 2009-funded California High-Speed Rail has proposed a station. However, the proposed station on the eastern outskirts of Hanford is listed as "optional" and will not be built without matching local funds or in-kind support. Greg Gatzka, Kings County's Community Development Director, was quoted in a June 2011 newspaper story that "the real question is whether high-speed rail is going to authorize a station there. They have a priority list and this station is at the bottom of the list."

Highway 43: Connects to Selma to the north and Corcoran to the south.

Highway 198: Connects to Lemoore to the west and Visalia to the east.

Formerly, the water had contained naturally occurring arsenic in excess of the maximum contaminant level adopted by the U.S. Environmental Protection Agency. However, according to the Consumer Confidence Report issued by the city of Hanford in March 2010 for calendar year 2009, as of November 11, 2009, the city now supplies water that is below the federal standard of 10 micrograms of arsenic per liter of water. The city's mitigation project consisted of reducing the arsenic content in two existing deep water wells, drilling five replacement wells, and eliminating eight wells that produced water that exceeded standards.

Although it does not pose a health hazard, Hanford's drinking water also naturally contains hydrogen sulfide, which caused the water to have a noticeable "rotten egg" odor. In 2014, the city began chlorinating its water for the first time, which eliminates the hydrogen sulfide odor. In February 2015, the city completed a project to chlorinate all of its water.

The wastewater treatment plant is located in the southern part of the city on Houston Avenue and treats 5 million gallons of sewage per day. The treated effluent is used to irrigate non-food crops.

Southern California Edison provides electricity to most of Hanford. However, the industrial park area in the southernmost part of the city is served by the Pacific Gas and Electric Company.

Natural gas is supplied by the Southern California Gas Company.

Telephone service is provided by AT&T. Comcast has the cable TV franchise for Hanford.

The Clark Center for Japanese Art and Culture

The former Clark Center had the mission of collecting, preserving and exhibiting works of fine art, primarily the arts of Japan. The Center also housed a specialist library for Japanese art and culture. The Clark Center closed permanently on June 30, 2015. The art collection was moved to the Minneapolis Institute of Arts and the bonsai collection was transferred to the Shinzen Friendship Garden at Woodward Park in Fresno, California.

The Hanford Carnegie Museum was built in 1905 as one of the many Carnegie libraries that were funded by the steel industry magnate, Andrew Carnegie. The library was replaced by a new structure at a different location in 1968. The old library was subsequently renovated and re-opened as the Hanford Carnegie Museum in 1975. The building is of Romanesque architecture with displays of furniture and photos describing the history of the Hanford area.

The Kings District Fair is a traditional county fair held on four days in mid-June at the Kings Fairgrounds.

The Renaissance of Kings Cultural Arts Faire is held the first weekend of October at Courthouse Square in Hanford's city center. The Faire recreates the period of time during the reign of King Henry VIII of England. There is no admission charge and the event typically attracts 15,000 people over the two-day period. The event was cancelled in 2012 but returned in 2013.

The Kings Art Center was opened in 1989 to be the premier visual arts gallery and art training center of Kings County. Gallery shows are changed approximately every four weeks. Typical shows include photography, pottery, water color, mixed media, prints, textiles and fibers. Art classes for adults and children are scheduled throughout the year.

The Kings Symphony Orchestra was founded in 1963 and draws musicians from throughout the central and southern San Joaquin Valley. The orchestra generally performs four times a year with a variety of classical and "pops" repertoire.

William Saroyan's short story, "The Journey to Hanford" that appeared in My Name Is Aram is a comic account of two characters from Fresno – a boy and his wastrel uncle – who share a single bicycle as they travel the approximately thirty-mile route between Fresno and Hanford, taking along a sack of rice to feed them through what turns out to be a largely pointless summer.

Chinese immigrants arrived in the late 19th century to build railroads and work on farms. They created a thriving Chinatown in Hanford in the neighborhood around China Alley. China Alley was the site of the famous but now closed Imperial Dynasty restaurant. Hanford's Taoist Temple (listed on the National Register of Historic Places) built in 1893 is also located there. A Moon Festival is held in China Alley in early October. In July 2011, Hanford city council commissioned a study of China Alley with the hope of revitalizing it in the future.

While the black community has long played an important role in the city, the City of Hanford only began to celebrate Martin Luther King, Jr. Day on January 15, 2007 after a long battle led by the local branch of the NAACP. The City Council then recognized the day as an official holiday with a resolution honoring Dr. King, read by then Mayor Joaquin Gonzales. The most prominent African-Americans living in the community include Chris Jordan, almost 30-year veteran City of Hanford Police Captain, then elected in 2006 as the first black Sheriff of Kings County. The late civil rights activist, Wanda Williams-Hinton, turned the Black History Month celebration into an annual citywide tradition; that has since been carried on by community leader Gerry Young.

Hanford is a sister city with Setana, a small town on Hokkaido, Japan. The program is known for promoting international friendship. Both cities send a delegate group of both prominent city citizens and high school students. For the city of Hanford, high school students are selected from both high schools through an application and interview process for delegate spots. The Setana high school provides a student delegate position for their entire upper class. Hanford delegates travel to Setana, Japan in the summer. Setana delegates travel to Hanford in the winter. 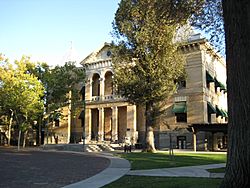 All content from Kiddle encyclopedia articles (including the article images and facts) can be freely used under Attribution-ShareAlike license, unless stated otherwise. Cite this article:
Hanford, California Facts for Kids. Kiddle Encyclopedia.