Tehachapi Pass is a mountain pass crossing the Tehachapi Mountains in Kern County, California. Traditionally, the pass marks the northeast end of the Tehachapis and the south end of the Sierra Nevada range.

The route is a principal connector between the San Joaquin Valley and the Mojave Desert. The Native American Kitanemuk people used the pass as a trade route before the American settlement of the region in the 19th century. The main line of the former Southern Pacific Railroad opened though the pass in 1876; the tracks are now owned by the Union Pacific Railroad and shared with BNSF Railway. U.S. Route 466 was built in the 1930s, and the road is now State Route 58. The Pass is also the route of the planned California High-Speed Rail line.

The Tehachapi Mountains are also crossed by Tejon Pass at the southwest end of the range.

The precise meaning of the name Tehachapi Pass is often a source of confusion. Technically (i.e., as noted on USGS topographic maps), the name refers to the narrowest part of the canyon on the eastern approach to the summit (as at San Gorgonio Pass), where the elevation is about 3,771 feet (1,149 m). The actual high point is just east of the town of Tehachapi, at an elevation (on the railroad) of 4,031 feet (1,229 m). The highway sign refers to this location as Tehachapi Summit. However, the term Tehachapi Pass is routinely used to refer to both this location and the approaches on either side.

The area east and south of the pass is home to the Tehachapi Pass Wind Farm, one of California's larger wind farms. The pass is also a proposed route for the California High-Speed Rail line between Palmdale and Bakersfield. 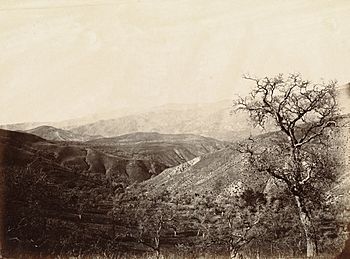 The Tehachapi Mountains and Tehachapi Pass in 1869.

The railroad landmark known as the Tehachapi Loop is about 18 miles (29 km) west of the summit.

All content from Kiddle encyclopedia articles (including the article images and facts) can be freely used under Attribution-ShareAlike license, unless stated otherwise. Cite this article:
Tehachapi Pass Facts for Kids. Kiddle Encyclopedia.