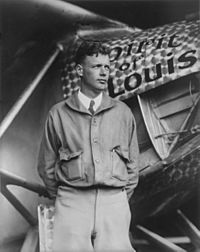 In May 1927, Charles Lindbergh performed the first solo-flight across the Atlantic Ocean. The aeroplane was called Spirit of Saint Louis.

A Swedish American (Swedish: Svenskamerikan) is an American person of Swedish descent. They usually come from the great migration from Sweden to the United States in the 19th century. Many of them settled down in Minnesota.

All content from Kiddle encyclopedia articles (including the article images and facts) can be freely used under Attribution-ShareAlike license, unless stated otherwise. Cite this article:
Swedish American Facts for Kids. Kiddle Encyclopedia.