Reedley is a city in Fresno County, California, United States. It is located in the San Joaquin Valley, 22 miles (35 km) east-southeast of Fresno, at an elevation of 348 feet (106 m). The population at the 2010 census was 24,194. Its chief economic source is agriculture, particularly fruit and vegetable cultivation and has thus dubbed itself "The World's Fruit Basket". Reedley is situated along the Kings River, downstream from Centerville.

Reedley hosts several cultural festivals, including but not limited to the Reedley Fiesta, and the Electrical Farm Equipment Parade.

Reedley is named for Thomas Law Reed, a Civil War veteran who gave half of his holdings to the township in 1888.

American Civil War hero Thomas Law Reed settled here to provide wheat for Gold Rush miners in the mid-1800s. His donation of land for a railroad station site established the town as the center of the San Joaquin Valley's booming wheat business. Railroad officials commemorated his vision by naming the fledgling City in his honor. When mining fever began to fade, wheat demand slackened. Kings River water was diverted for crop irrigation, and the region began its over 100-year tradition of bountiful field, tree, and vine fruit harvests. In 1913 the land was developed with cement sidewalks, sewer systems, as well as the construction of the first steel water tower. With water and railroad services in place, farming families of European immigrants were recruited, and the settlement was incorporated in 1913, with Ordinance No. 1 adopting and prescribing the style of a Common Seal on February 25, 1913. An important element in the early town was a colony of German Mennonites, whose strong traditions and values still shape Reedley's culture. The population today is diverse and multicultural and Reedley boasts a current population equal to 20,500. Each of the town's major ethnic groups has shown strong civic leadership, a desire to retain cultural and religious traditions, and the ability to work successfully together for Reedley's betterment. Among the community's 25 churches are Anglican, Catholic, Christian, Armenian, Baptist, Buddhist, Mennonite, and many other congregations. The area's 41 organizations and 12 civic clubs include Filipino community organizations, a Finnish organization, and American Lebanese Women's Club, several Hispanic and Latin American organizations, and a Japanese organization among the many sports, cultural, conservation, charitable, and civic associations. In 1988 Reedley celebrated the first 100 years of its multicultural heritage, and the 75th anniversary of incorporation. It is also noted for being the location of the opening and monster truck scenes in the movie Roadhouse starring Patrick Swayze in 1989. 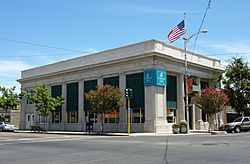 The Reedley National Bank building is listed on the National Register of Historic Places.

Downtown Reedley offers various specialty shops that many visitors and locals enjoy. From dining to shopping, people can view art galleries around downtown and can taste exquisite cuisines from Armenian to Italian and Mexican to Asian. Downtown Reedley houses retail stores with many collectibles such as David's and Music schools such as the Reedley School of Music, the Reedley Ballet Studio, and the Premier Dance Studio. Cafes and popular hang out spots such as Wakehouse Bar and Grill and Mainstreet Cafe. Reedley's downtown is also the home of Traffic Magazine, and also Reedley's local newspaper The Reedley Exponent Downtown Reedley offers many interesting things for locals and visitors alike. People can dine and be entertained at local bars or even watch a musical at The Reedley Opera House. The Reedley Museum also offers rich facts of history about Reedley and Central California. 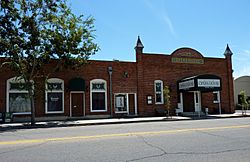 The building that houses the Opera House Theater was built in 1903, after a fire destroyed two blocks of downtown Reedley. The small theater languished, until being restored in 1986. This historic building currently houses the Reedley's River City Theatre Company. The City of Reedley acquired the building in 2002 by donation. River City Theatre currently leases the space and produces musicals and stage plays year-round. 2009 marks River City's sixth season in the Opera House. They have performed such shows as Big River, The People VS. Mona, Pump Boys & Dinettes, The Odd Couple, Sunshine Boys, The Nerd, The Music Man, Oliver!, Steel Magnolias, Little Shop of Horrors and some local original works written and directed by founder of the company Mark Norwood. Original shows include: Blossoms Up!, Blossoms Up!: Fiona's Revenge, Babes In Toyland: Barnabe's Story, Best Wishes, and Fanny's Up. Outside talent is brought in occasionally: LA Improv and Jeremy "Elvis" Pearce. River City Theatre Company is a non-profit theatre company dedicated to the performing arts and its community. 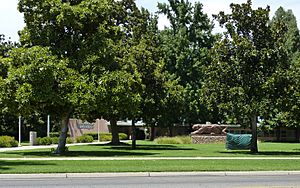 All content from Kiddle encyclopedia articles (including the article images and facts) can be freely used under Attribution-ShareAlike license, unless stated otherwise. Cite this article:
Reedley, California Facts for Kids. Kiddle Encyclopedia.