Shafter is a city in Kern County, California, United States. It is located 18 miles (29 km) west-northwest of Bakersfield. The population was 16,988 at the 2010 census, up from 12,736 at the 2000 census. The city is located along State Route 43. Suburbs of Shafter include Myricks Corner, North Shafter, Smith Corner, and Thomas Lane. 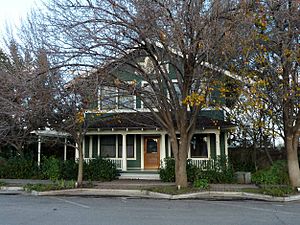 The Shafter Depot Museum is housed within the old Santa Fe Passenger and Freight Depot.

The city of Shafter began as a loading dock along the Santa Fe Railroad right-of-way. The community was named for General William Rufus Shafter who commanded US Forces in Cuba during the Spanish–American War. Property was sold beginning in 1914 and the city incorporated in 1938.

Also of historical note, Shafter is home to Minter Field, which began operations in June 1941 and saw heavy use during World War II. Approximately 7,000 troops were stationed at the airstrip which hosted up to 600 prisoners of war as well. Today it is publicly owned and administered by the Minter Field Airport District and serves as an industrial center and airport for crop dusters and private aircraft. The Minter Field Museum is maintained on location as well.

The first truly successful human powered airplane, the Gossamer Condor, piloted by Bryan Allen won the Kremer prize on August 23, 1977 at Shafter's Minter Field. Allen piloted, and powered, the Paul MacCready designed airplane along the one mile long figure '8' course with two 10 foot high obstacles as specified by the Royal Aeronautical Society to claim the £50,000 prize. A California State Monument is located at the Field for this event.

The Shafter Historical Society also maintains two other museums. The Green Hotel and the Shafter Depot Museum emphasize various aspects of the daily lives of Shafter residents in years past; both structures are listed on the National Register of Historic Places.

In 2009, a Shafter High School senior, Anna Jelmini, received the key to the city for placing in the Junior Olympics. She also fell just short of meeting the standards for the 2008 Olympics.

In 2013 Shafter celebrated the 100 year anniversary of its founding. The Centennial Celebration included several events highlighting the history of the town, including a flyover of a PT-13 Training Plane that was stationed at Minter Field during World War II.

According to the United States Census Bureau, the city has a total area of 27.9 square miles (72.3 km2), all of it land.

Historically, much of Shafter's economy has been based on agriculture and ag-related industry. Local crops include almonds, pistachios, cotton, grapes and alfalfa as well as some carrots, potatoes and other vegetables. Cotton and potatoes have a special historical significance for the town of Shafter as leading industries in different periods of the town's development.

More recently Shafter has become a hub for a variety of economic endeavors including; manufacturing, logistics, and energy. 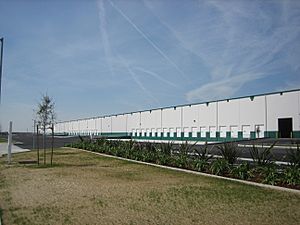 Shafter is home to the Paramount Logistics Park (PLP) (formerly known as the International Trade and Transportation Center (ITTC)), built to facilitate Central Valley access to ports in Long Beach and Los Angeles via the Burlington Northern Santa Fe railway. Shafter will likely continue to grow economically as the PLP builds out. Ross Dress for Less announced its plans to move into the PLP in 2013.

American Tire Distributors signed a 20-year lease with Roll Real Estate to lease over 1 million square feet of distribution space. The tire and wheel distributor has begun working out of a portion of the space as of Summer 2014, while the rest continues to be built out. 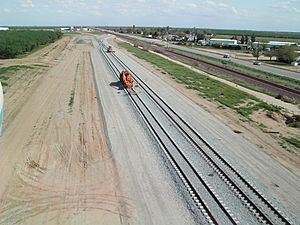 One reason for the growth of the Paramount Logistics Park Shafter is the City of Shafter's Rail Facility. The Facility has more than 10,000 feet of track owned by the City of Shafter and operated by the Public Works Department. It connects the BNSF rail line to tenants in the Paramount Logistics Park. This is the only rail served industrial park in the San Joaquin Valley.

The City of Shafter reopened the Shafter Modified Community Correctional Facility in 2013 after a two-year closure. Profits from the facility directly benefit public safety initiatives and the Shafter Education Partnership, focused on early literacy and college readiness.

In 2006 the City of Shafter began construction on a 25-mile fiber-optic backbone ring. The city currently operates a 10 Gbit/s Ethernet network over the Shafter Connect network with near-zero unscheduled downtime since the network inception in 2007. The installed infrastructure will support 40 Gbit/s and faster speeds as technology standardizes. The network currently serves several areas of the city including:

The City of Shafter is the only municipality in the Central Valley that offers fiber-optic connections. 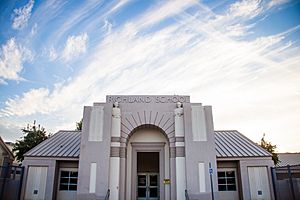 Math has been a strength of Richland Schools in recent years. The percentage of Richland 8th graders scoring “Proficient” or “Advanced” in Algebra quadrupled from 2008 (8%) to 2013 (33%), earning the Richland Junior High Algebra Department an Award from the Shafter Chamber of Commerce in 2013. In 2014, Richland students placed in the top three in four of eight categories at the Kern County Math Field Day Competition.

In 2014, Mr. Claudio Martinez from Richland's Sequoia Elementary was honored as the regional GATE Teacher of the Year from the Regional California Association for the Gifted.

Shafter is also home to Shafter High School, a member of the Kern High School District. It was built by architects Edwin J. Symmes and Clarence Cullimore in the late 1920s. Officially founded in 1928, Shafter High School has a history as old as the town itself. Today, it is administered by Principal Russell Shipley. The school has undergone many recent renovations including the construction of a new cafeteria and new classroom space to meet the needs of a growing student body. The school is also home to the historical Fred L. Starrh Performing Arts Center, a large theater building with a fully functional fly system. 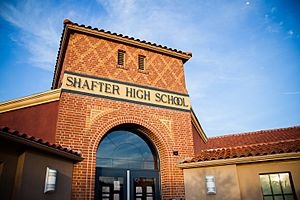 In order to support its goal of forming a strong foundation in reading the Shafter Education Partnership distributes books for children to take home, offers summer and after school reading programs. 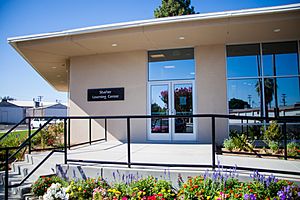 The Shafter Education Partnership, in conjunction with the Kern County Library and Richland School District, opened the Shafter Learning Center in June 2014. In that same year the building, which had housed the Shafter branch of the Kern County Library, was remodeled to include two classrooms and a computer lab. Classes are offered for students in the community and subjects range from math, keyboarding, art, science and reading to language courses. In 2021 the Kern County Shafter Library Branch closed. In response to the closure, the City of Shafter will open a municipal city library in the same building in partnership with Bakersfield College.

All content from Kiddle encyclopedia articles (including the article images and facts) can be freely used under Attribution-ShareAlike license, unless stated otherwise. Cite this article:
Shafter, California Facts for Kids. Kiddle Encyclopedia.