The National Plan of Integrated Airport Systems categorized it as a primary commercial service airport. Federal Aviation Administration records say it had 36,935 passenger boardings (enplanements) in calendar year 2008, 28,368 in 2009 and 50,632 in 2010.

In the months preceding World War II, the U.S. Army entered into the first of many lease agreements with the City of Stockton (on August 15, 1940) to build and operate an Army training facility at Stockton Municipal Airport.

Stockton Army Airfield was initially garrisoned by the 68th Air Base Group (Special) under the Air Corps Advance Flying School. Between 1940 and 1945, Stockton Field served as a training installation under the West Coast Training Center (later Western Flying Training Command) headquartered at Santa Ana Army Air Base. Known sub-bases and auxiliaries of Stockton AAF were:

In May 1944 all of the facility was consolidated into the 3033rd Army Air Forces Base Unit. Given the airfield's proximity to logistical facilities under the Army Air Forces and Army Service Forces, the site soon became a logistical hub for the U.S. Army in general and the Army Air Forces in particular. This resulted in an increased number of transport aircraft passing through Stockton Field.

On March 2, 1945 the final class completed training and Stockton AAF was transferred from the control of the Western Flying Training Command to the Air Transport Command. With this transfer, the 3033rd AAFBU was redesignated as the 591st AAFBU.

In October 1946 Stockton AAF was declared surplus. As 1,044.18 acres were in the process of being transferred to the War Assets Administration for disposal, 71.36 acres, consisting of a major portion of the former cantonment area including housing, storage facilities, and a sewage disposal plant, were leased to U.S. Army's Stockton General Depot located to the south in nearby Lathrop.

The City of Stockton and the County of San Joaquin resumed operating the former Stockton Municipal Airport on December 16, 1946 under a joint (interim) license. On the 1,044.18 acres of leased land (950 acres of which comprise the airport now under license) there were approximately 175 buildings, including 50 airport-related structures which were included in the above described license. The buildings were primarily the Quartermaster 700-series and 800-series type construction with concrete foundations, wood floor, composition roof, and wood lap siding.

On July 8, 1957 the City of Stockton transferred half of its interest in the Stockton Municipal Airport by Grant Deed, and San Joaquin County assumed administration over the airport (subject to certain reservations, restrictions and conditions according to the "Agreement" with the United States of America dated December 23, 1948 (Appendix A). The end of the Korean War caused more mission changes at Sharpe General Depot and the Sharpe General Depot Troop Field Annex. In 1958, the Sharpe General Depot received a Fourth Echelon Air Maintenance Support mission on U.S. Army aircraft within the Sixth U.S. Army Area. The Site then served as home to the Sixth U.S. Army Aircraft Field Maintenance Activity operated by Detachment 3, 6932nd Service Unit. This unit provided maintenance support to U.S. Army rotary and fixed wing liaison aircraft in the Sixth U.S. Army area and Buildings 1000, 1001, and 1003. The Site also was the home of the 30th Engineer Group (Topographic) and the 521st Engineer Company (Topographic, Aviation). During 1959 and 1960, construction of a new airstrip, hangar and shop at Sharpe Army Deport curtailed the military's use of Stockton Airport. In June 1961, the Aircraft Field Maintenance Activity was transferred to Fort Ord, California. By July 1962, the Army Material Command was established with several sub-commands, including the Supply and Maintenance Command. This brought about another name change when Sharpe General Deport became Sharpe Army Depot Field Annex.

In January 1966 an Army Clothing Sales Store was transferred from Sacramento Army Depot and reopened in Building T-88 at the Site. A Branch Exchange of the Presidio of San Francisco was also established in Building T-137. On-post housing at Sharpe Army Depot Field Annex was limited, causing 44 sets of "inadequate quarters" to be established at the Site, whereby old barracks buildings were converted into "apartment-type quarters" with two apartments upstairs and two downstairs. To further accommodate the increase in soldiers now stationed at Sharpe Army Depot Field Annex, the Site now provided many additional services such as laundry, dry cleaning, and medical facilities.

United Airlines served Stockton from 1946 until 1980. Pacific Southwest Airlines (PSA) and successor USAir operated service from 1971–72 until 1980 and again in 1984–91. The original Frontier Airlines (1950-1986) followed by Continental Airlines flew from the airport to Denver from 1980 to 1988. Southwest Airways and successors Pacific Air Lines, Air West and Hughes Airwest served Stockton from 1955 until the late 1970s. The last commuter turboprop airline flights ended in 1995. America West Express, the regional affiliate of America West Airlines, started Canadair CRJ-200 regional jet flights to Phoenix in 2000–2001 but then ceased service and left the terminal empty in 2003.

In June 2006 Allegiant Air began round trip flights to Las Vegas with McDonnell Douglas MD-80s and this service continues at the present time.

On October 26, 2007 Allegiant Air began MD-80 flights to Phoenix-Mesa and on July 1, 2010 to Long Beach; however, both routes were then discontinued. 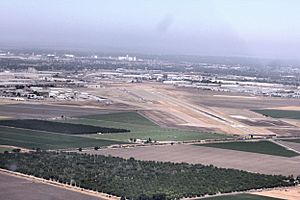 On October 28, 2011 Allegiant Air began twice weekly MD-80 flights from Stockton to Palm Springs but then discontinued this service as well.

On November 18, 2012 Allegiant Air began flying twice weekly Boeing 757-200 nonstop flights from Stockton to Honolulu. This service has since been cancelled. The Boeing 757 was the largest aircraft ever to serve the airport with scheduled passenger flights.

Allegiant Air remains the only air carrier at Stockton with one or two flights on average per day to Las Vegas. Allegiant also recently resumed non-stop service to Phoenix-Mesa with two weekly flights on Sundays and Thursdays, and also serves San Diego from the airport.

Load factors for Allegiant are reported to be about 90 percent for their flights from Stockton.

Aeromexico had expressed interest in starting service in 2006 to Guadalajara and Morelia, but the airport was unable to secure a customs facility. Federal officials saw no need for such facility as they already existed in Sacramento, Oakland, Fresno, San Francisco and San Jose.

Local officials filed an appeal and Congressman Richard Pombo also persuaded officials to approve a facility. Federal officials then reconsidered and approved the plans. Despite the approval, San Joaquin County Supervisors decided against financing the project

In June 2015, the airport was seeking funding for construction of a temporary customs inspection station at the airport, to allow for possible service on Mexican airlines Volaris and Aeromexico.

In February 2016, Amazon.com began daily chartered air cargo flights into Stockton Metropolitan Airport as part of their Project Aerosmith, a project by Amazon.com to test the idea of starting their own air cargo operation. The flight are operated daily to Airborne Airpark by Air Transport International on behalf of Amazon, now known as Prime Air utilizing a Boeing 767-300 aircraft. The trial flights from Wilmington, OH were originally operated into Oakland International Airport at the start of Project Aerosmith, but soon after operations were shifted over to Stockton airport.

The airport also has a 44,355 sq. ft. terminal building, capable of holding almost 400 passengers in its hold room, as well as up to 5 aircraft at a time once upgrades of the apron are complete. The airport is also seeking to add customs facilities to attract new international flights to Mexico. 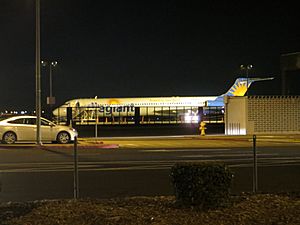 The airport is located south of Downtown Stockton, between Interstate 5 and Highway 99. Motorists are instructed to take Arch Airport Road from either of those two freeways to South Airport Way, then head south to the intersection of South Airport Way and C.E. Dixon Street, and then turn east to the airport entrance at C.E. Dixon and Longe Streets.

Daytime parking is free while overnight parking is charged a fee. The airport is also served by Lyft and the Yellow Cab Company of Stockton.

All content from Kiddle encyclopedia articles (including the article images and facts) can be freely used under Attribution-ShareAlike license, unless stated otherwise. Cite this article:
Stockton Metropolitan Airport Facts for Kids. Kiddle Encyclopedia.