Los Banos ( LOHSS-_-BAN-ohss), alternatively Los Baños ( LOHSS-_-BAN-yohss), is a city in Merced County, central California. It is located in the San Joaquin Valley, near the junction of State Route 152 and Interstate 5.

The name Los Banos is from Spanish los baños "the baths". It is named after a spring that feeds natural wetlands in the western San Joaquín Valley. Its official spelling, reflected in the name of its post office, omits the tilde of the ñ. 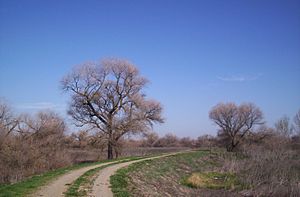 Los Banos has a Mediterranean climate with cool winters and hot summers. Most of the precipitation falls in the winter months. Gusty winds are common in the late afternoon, especially in the vicinity of nearby Pacheco Pass. 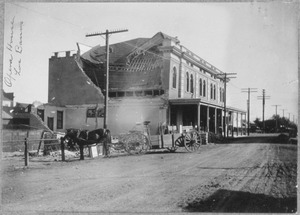 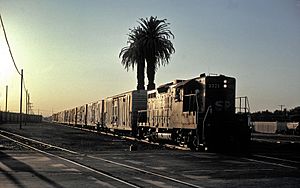 The Los Banos area was initially settled, according to Mexican land grant records, back in the 1840s. The first white settler in the area was Uriah Wood, who built his two-room cabin in 1859. The original site of Los Banos was located several miles from the current town center, about a mile and half west of the railroad near present-day Volta. The town was essentially a trading post and received its name when the Post Office was established and the Post Office Department designated the office "Los Banos" after the nearby creek. When the railroad arrived, Los Banos relocated to its present-day site. The first post office opened in 1873.

Land and water rights were important to early Los Banos residents, but those rights were recognized only when the land and deed were registered. Sometimes those rights depended on fleet footedness, as it did in the "race" between Los Banos residents Uriah Wood and Henry Miller. Wood, whose homestead was located off of Badger Flat Road, raced Miller to the land office in Stockton to insure his claim to the land would be recognized. After crossing the San Joaquin River, Wood paid the ferryman $5 to hold the boat on the east side of the river to insure he would gain sufficient distance from Miller to insure he would reach the land office first. Wood succeeded and the seven sections that he registered cost him only 45¢ an acre.

The centerpiece of downtown Los Banos is the newly created Miller Plaza, honoring early California rancher, Henry Miller. The 10-acre (4.0 ha) half-oval public plaza features a monumental scale bronze arrangement of Miller with cattle. At one time in the late nineteenth century, Miller was the largest land owner in the United States. The success of his business monopolized the California agricultural industry, funneling resources and supplies to create his prosperous company. Centered around cattle farming, the Miller and Lux Corporation ultimately transformed the San Joaquin Valley into what can be considered as a precursor to corporate farming and turning independent farmers into wageworkers. His company, the Miller & Lux Corporation, was headquartered in Los Banos on a site currently housing the Mexican restaurant España's and the Canal Farm Inn.

Los Banos has a long history of Portuguese and Spanish immigrants, as do many of the nearby towns on the west side of the San Joaquin Valley. This is reflected both in local restaurants and in several festivals and parades that take place during the year. There is also a significant community of Basques. Los Banos is locally known for its annual May Day Fair during the first week of May.

Los Banos is home to The Randall Fawcett House which is a Frank Lloyd Wright designed Usonian home.

Since the 1980s, the city's population has changed with a continuing influx of people who work in the San Jose/Silicon Valley area but seek more affordable housing and slower pace of semi-rural life, a pattern seen in many other small towns within commuting distance of Silicon Valley.

K–12 education is provided by the Los Banos Unified School District. In addition, the Los Banos Campus of Merced College has served community college students since 2007.

All content from Kiddle encyclopedia articles (including the article images and facts) can be freely used under Attribution-ShareAlike license, unless stated otherwise. Cite this article:
Los Banos, California Facts for Kids. Kiddle Encyclopedia.