The San Luis Reservoir is an artificial lake on San Luis Creek in the eastern slopes of the Diablo Range of Merced County, California, approximately 12 mi (19 km) west of Los Banos on State Route 152, which crosses Pacheco Pass and runs along its north shore. It is the fifth largest reservoir in California. The reservoir stores water taken from the San Joaquin-Sacramento River Delta. Water is pumped uphill into the reservoir from the O'Neill Forebay which is fed by the California Aqueduct and is released back into the forebay to continue downstream along the aqueduct as needed for farm irrigation and other uses. Depending on water levels, the reservoir is approximately nine miles long from north to south at its longest point, and five miles (8 km) wide. At the eastern end of the reservoir is the San Luis Dam, or the B.F. Sisk Dam, the fourth largest embankment dam in the United States, which allows for a total capacity of 2,041,000 acre feet (2,518,000 dam3). Pacheco State Park lies along its western shores.

Completed in 1967 on land formerly part of Rancho San Luis Gonzaga, the 12,700 acres (5,100 ha) reservoir is a joint use facility, being a part of both the California State Water Project and federal Central Valley Project, which together form a network of reservoirs, dams, pumping stations, and 550 miles (885 km) of canals and major conduits to move water across California. The San Luis Reservoir is located in Merced County, and has a visitor center located at the Romero Outlook where visitors can learn more about the dam and reservoir. The surface of the reservoir lies at an elevation of approximately 544 ft (166 m), with the O'Neill Forebay below the dam at 225 ft (69 m) above sea level. This elevation difference allows for a hydroelectric plant to be constructed - the Gianelli Hydroelectric Plant. Power from this plant is sent to a Path 15 substation, Los Banos via a short power line. Those 500 kV wires, carrying both the power generated here and elsewhere, leave the area and cross the O'Neill Forebay on several man-made islands.

San Luis Reservoir is part of the larger San Luis Reservoir State Recreation Area (California State Parks) and therefore offers many recreational opportunities for fishermen, boaters, and campers. The park is patrolled by California State Park Peace Officers by vehicle, vessel, and off-highway vehicle. In addition to camping and boating, day use picnic areas are available at San Luis Creek, and an off-highway vehicle (OHV) area is available east of the main area at the intersection of Gonzaga Road and Jaspar-Sears Road.

Camping is available at four campgrounds.

Improved boat launch ramps are offered at Dinosaur Point and the Basalt area. Due to the reservoir's water being imported from the Sacramento River Delta, San Luis shares many of its fish species with that area, including largemouth bass, striped bass, crappie, bluegill, shad, yellow perch, and occasional sturgeon and salmon. The California Office of Environmental Health Hazard Assessment (OEHHA) has developed a safe eating advisory for fish caught in the San Luis Reservoir based on levels of mercury or PCBs found in local species. The lake is noted for its high winds and has wind warning lights at Romero Outlook, Basalt Campground, and Quien Sabe Point. 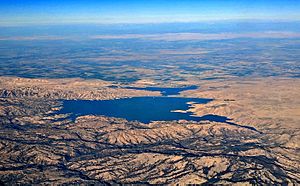 The San Luis Reservoir and O'Neill Forebay, aerial view from near Hollister, California, with late afternoon shadows outlining the hills of the oak woodlands around it.

All content from Kiddle encyclopedia articles (including the article images and facts) can be freely used under Attribution-ShareAlike license, unless stated otherwise. Cite this article:
San Luis Reservoir Facts for Kids. Kiddle Encyclopedia.