The structure of PCB

A condenser from a 1960s washing machine

Polychlorinated biphenyls (often shortened to PCBs) are organic chemical compounds that contain chlorine atoms. They were used in industrial chemistry, and to make certain transformers, capacitors, and cooling fluids. The Stockholm Convention on Persistent Organic Pollutants declared them to be among the worst chemical pollutants. Their use has been banned worldwide, since 2001. The mode of action of these substances is similar to that of dioxin.

Polychlorinated biphenyls were widely used, and they can be found in the atmosphere, the soil, and the bodies of water anywhere on the earth. In the short term, these substances are not very toxic, but they accumulate in the body. They are teratogens, and may cause cancer. 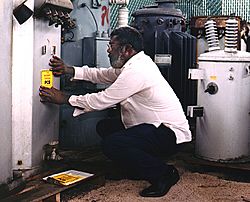 All content from Kiddle encyclopedia articles (including the article images and facts) can be freely used under Attribution-ShareAlike license, unless stated otherwise. Cite this article:
Polychlorinated biphenyl Facts for Kids. Kiddle Encyclopedia.