Coalinga is a city in Fresno County and the western San Joaquin Valley, in central California.

It was formerly known as Coaling Station A, Coalingo, and Coalinga Station.

Legendary bandit Joaquin Murrieta was killed in 1853 at his headquarters, Arroyo de Cantua, north of Coalinga. California Historical Landmark #344 marks the approximate site of where he was slain, near the junction of present-day State Route 33 and Route 198. 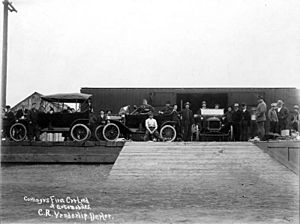 Coalinga gets its first load of Model T cars, about 1914

Before 20th century diesel locomotives, steam locomotives were used, and powered in the San Joaquin Valley by burning coal mined from the northern foothills of Mount Diablo to the north. The Southern Pacific Railroad Company established the site as a coaling station in 1888, and it was called simply Coaling Station A. Local tradition has it that an official of Southern Pacific made the name more sonorous by adding an a to it. However, it is just as likely that the small railside signs of the day, which often abbreviated names, read "COALINGA" to mean "Coaling A." [Another example is Braner's Cut north of Eureka, whose sign said "BRACUT," which has now become the name of that spot along Highway 101.] The resemblance to Nahuatl (where cōātl = "snake") is accidental.

The first post office was established in 1899. The city was incorporated in 1906.

Coalinga's water was so mineral-laden that potable water had to be brought in by railroad in tanker cars from Armona, California. For many years, "Armona Water" was the only water residents could drink. Coalinga was one of only a few towns in the United States that had three taps — one for hot water, one for cold water, and one for drinking water. Finally, in the early 1960s, Coalinga held the first practical demonstration for reverse osmosis (RO), and its Armona water was replaced by RO water. 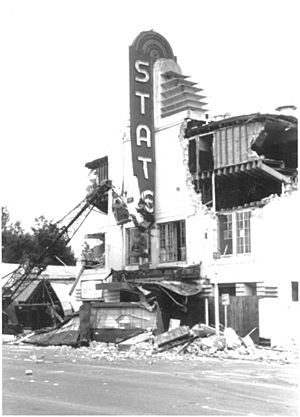 On May 2, 1983, Coalinga was struck by an earthquake with a moment magnitude of 6.5, which nearly destroyed more than 300 homes and apartment buildings; another 691 buildings suffered major damage, and hundreds more had minor damage. Damage was severe in downtown Coalinga–the eight block commercial district was almost totally destroyed. The shock was felt as far away as Los Angeles and western Nevada, and was followed by a series of aftershocks that caused additional minor damage and some injuries.

Coalinga is located 52 miles (84 km) southwest of Fresno, at an elevation of 673 feet (205 m). The topography is generally level, suitable for a number of field crops which do not require large amounts of water.

Underlying rock formations include the occurrence of Vaqueros sandstone. Surrounding the town in a semicircle from the west, around the north, and to the east are several anticlinal formations containing considerable accumulations of petroleum as the Coalinga Oil Field, from which oil has been withdrawn for more than a hundred years.

The city is located near a particularly active portion of the San Andreas Fault, and earthquakes are frequent.

Coalinga has a desert climate, with hot summers and cool winters. Its hardiness zone is 9a. The average annual precipitation is 8.25 in (210 mm), falling mainly from October to May. 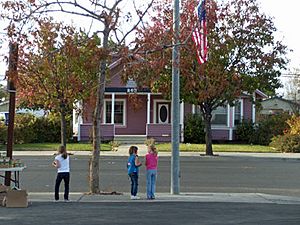 The racial makeup of Coalinga under those circumstances was 57.3 percent white, 2.4 percent African American, 1.5 percent Native American, 1.7 percent Asian, 0.2 percent Pacific Islander, 32.3 percent from other races, and 4.6 percent from two or more races. About half the population was Hispanic or Latino.

The median income for a family was $41,208, about $11,000 less than for other families in California or the country at large.

The Coalinga Chamber of Commerce Web site in 2007 estimated a population of 18,061 for the city.

The Harris Ranch is a major local cattle ranch, which also features a hotel, several restaurants, and a gift shop for travelers. It is located on Interstate 5 east of Coalinga. The Harris Ranch Airport is nearby.

The Horned Toad Derby is held in Coalinga in late May over the Memorial Day weekend annually. The three-day event is similar to the more famous Jumping Frog Jubilee held in Calaveras County, California, but utilizes locally caught horned toads (lizards) rather than frogs. The tradition began in 1935.

The WHAMOBASS Balloon Rally is hosted by Coalinga annually on the November weekend closest to Montgolfiere Day (November 21) every year. It's the longest consecutively running annual hot air balloon rally in the world. It is sponsored by the Whiskey Hill Atherton Menlo Oaks Ballooning & Sporting Society. Typically, more than 40 balloons ascend at dawn on Saturday and Sunday morning from the athletic field of West Hills College Coalinga. A small number fly on Friday and occasionally on Thursday.

The R.C. Baker Memorial Museum is housed in the former Baker Oil Tools machine shop in town. The museum displays local fossils, models of prehistoric fauna, Native American artifacts, and items from pioneer settlers. A restored 1934 Richfield Gas Station is also on the museum's property. The museum continues to collect historical items donated to the collection.

The Coalinga Rifle Club, whose 25 point, 1000 yard range facility is west of town, is host to various California State Rifle Championships. These include: California State Long Range, Mid Range, Palma Rifle, Fullbore, Service Rifle and High Power Championships. It is also the home of the California Grizzlies, Junior National Champions for the last four years. They have recreational facilities for rifle, pistol, shotgun and a 500-meter Metallic Silhouette Range.

The New Coalinga Municipal Airport is host to the annual Northern California Aerobatic contest. This early June event is typically the largest of five annual California regional aerobatic contests sanctioned by the International Aerobatic Club. It relocated to Coalinga from Paso Robles in 2013. Visitors to the airport can view upwards of 45 pilots flying a wide variety of competitive aircraft in five categories of competition over a two-day period.

All content from Kiddle encyclopedia articles (including the article images and facts) can be freely used under Attribution-ShareAlike license, unless stated otherwise. Cite this article:
Coalinga, California Facts for Kids. Kiddle Encyclopedia.