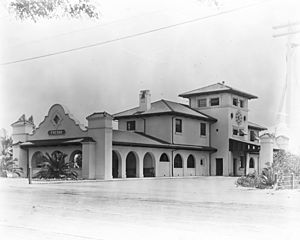 The station was built in 1899 for the San Francisco and San Joaquin Valley Railroad (SF&SJV) and was designed by William Benson Storey for the Atchison, Topeka and Santa Fe Railway (ATSF or Santa Fe). It is very similar to the Stockton – San Joaquin Street Station. The station was once the Santa Fe's Valley Division Headquarters, and was expanded or renovated nine times between 1908 and 1985. Sante Fe closed the station for passenger service in 1966 and completely shuttered the building in the early 1990s. When passenger service to Fresno was reinstated on 5 March 1974 Amtrak used a space in the nearby freight house. By the time the city of Fresno purchased the station in 2003, it had fallen into disrepair. The station reopened on 12 February 2005 after a US$6 million renovation project largely restored it to original 1899 appearance. After renovations there are now is 5,400 sq ft (500 m2) dedicated to passenger service and another 12,300 sq ft (1,140 m2) available for lease. The Santa Fe Depot was added to the National Register of Historic Places in 1976. 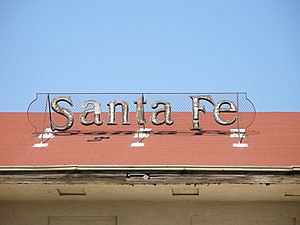 From its beginning until Amtrak took over nearly all passenger rail service within the United States in 1971, the station was served by ATSF trains, including the famous San Francisco Chief and the Oakland-Barstow line. For the first few years after Amtrak's inception Fresno had no rail service. In 1974 service by Amtrak/Amtrak California's San Joaquin began. Initially, service only included daily service (once in each direction) between Oakland and Bakersfield. Originally, the next northbound stop was Merced, but by 1978 the Storey Train Station was added. (However, under Amtrak that station was known as Madera, rather than Storey.) As the years went by service increased substantially and by 2002 the San Joaquin ran twice daily (in each direction) between Sacramento and Bakersfield and four times daily (in each direction) between Oakland and Bakersfield.

Of the 74 California stations served by Amtrak, Fresno was the 11th-busiest, boarding or detraining 377,709 passengers in Fiscal Year 2018. Excluding passengers who are transferring to a Thruway Bus, Fresno has the highest ridership on the San Joaquins service.

The station has an indoor waiting room open from 5:30 am to 10:00 pm daily. Inside the station there is a baggage check service, baggage assistance, and an automatic check-in device. In addition to the ticketing agent, there is a Quik-Trak ticket kiosk. There is also a bathroom and payphone. The station has 11 short term and 98 long term parking spaces.

The Santa Fe passenger depot has two tracks, but only one side platform sees regular service. Amtrak trains switch onto this track just north or south of the station, leaving the Main Line clear for freight trains. There is a very narrow island platform between the tracks that is occasionally used when Amtrak trains are not able to switch onto the station track. Passengers are not allowed to wait on the island platform.

All content from Kiddle encyclopedia articles (including the article images and facts) can be freely used under Attribution-ShareAlike license, unless stated otherwise. Cite this article:
Santa Fe Passenger Depot (Fresno, California) Facts for Kids. Kiddle Encyclopedia.