Tracy is the second most populated city in San Joaquin County, California, United States. The population was 93,000 at the 2020 census. Tracy is located inside a geographic triangle formed by Interstate 205 on the north side of the city, Interstate 5 to the east, and Interstate 580 to the southwest.

The origins of Tracy are related to the mid-19th century construction of Central Pacific Railroad lines running from Sacramento through Stockton and to the San Francisco Bay Area. Tracy is part of the San Jose-San Francisco-Oakland, CA Combined Statistical Area, an extension of the Bay Area. A number of small communities sprang up along these lines, including the one named for railroad director Lathrop J. Tracy. Incorporated in 1910, Tracy grew rapidly and prospered as an agricultural area even when railroad operations began to decline in the 1950s. Beginning in the 1980s, Tracy experienced a growth spurt as people migrated to the city looking for affordable alternatives to Bay Area home prices, in addition to a more tranquil lifestyle. A steady period of growth ensued, as many companies found Tracy an ideal location for their distribution facilities.

Located in the Greater Bay Area, Tracy sits near both fertile and (due to a region of hills west of Tracy) infertile agricultural lands. Tracy has a Mediterranean climate. Some of this land (in the east and mostly north of Tracy because of the moist Delta river system) has come under increasing development pressure as the San Francisco Bay Area's vigorous population growth has spilled over into the Tracy area as well as other locations such as the new town of Mountain House (because of TRACY's Measure A in 1990) near the Bay Area's edge.

In an effort to reduce its impact on the environment, the city launched the Emerald Tracy Project in September 2009. City spokesman Matt Robinson said that if it succeeds, Tracy will be the second city after Riverside to satisfy the state’s goal for sustainable communities. 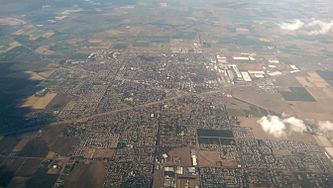 Tracy, California in 2016. Note large warehouses at east side of the city. 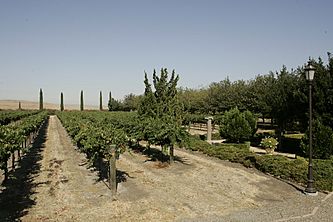 On August 7, 1998, a tire fire ignited at S.F. Royster's Tire Disposal south of Tracy on South MacArthur Drive, near Linne Rd. The tire dump held over 7 million illegally stored tires and was allowed to burn for over two years before it was extinguished. Allowing the fire to burn was considered to be a better way to avoid groundwater contamination than putting it out. The cleanup of chemicals released by the fire cost $16.2 million, and ultimately those releases did contaminate groundwater in the region anyway. 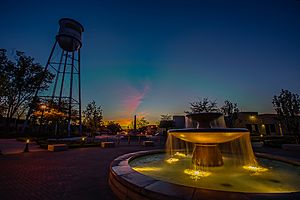 Greyhound, Tracer, and SJRTD all connect with taxis, bike stations, and parking at the Tracy Transit Center, a transit station built in 2010.

Amtrak Thruway buses connect serve the city's bus station to the area with six daily trips to the South Bay and two to San Francisco, all of which stop at BART and job centers in Livermore.

To meet the future transportation needs, which will connect San Joaquin Valley with the Bay Area, there are two Transit Stations in Tracy. One is located downtown and is designated for bus service, but is being considered as a possible site for California High-Speed Rail.

South Tracy offers the Altamont Corridor Express (ACE) service at Tracy (ACE station), which provides commuter rail transportation to the Bay Area and connects with VTA in San Jose, BART via shuttle in Pleasanton and Fremont, in addition to Amtrak train in Santa Clara and San Jose.

Interstate 205 passes along the north side of the city and connects the nearby Interstates 580 to the west and 5 on the east, with the three Interstates forming a triangle around much of the city. Business Loop 205 runs through the center of Tracy along 11th Street, formerly a portion of U.S. Highway 50. In addition, the northern terminus of State Highway 33 is located at South Bird Road and Interstate 5 southeast of Tracy.

Tracy is served by Tracy Municipal Airport, located south of the city. It serves general aviation; there is no scheduled airline service from the airport.

All content from Kiddle encyclopedia articles (including the article images and facts) can be freely used under Attribution-ShareAlike license, unless stated otherwise. Cite this article:
Tracy, California Facts for Kids. Kiddle Encyclopedia.