Pleasanton is an affluent city in Alameda County, California, incorporated in 1894. It is a suburb in the San Francisco Bay Area located about 25 miles (40 km) east of Oakland, and 6 miles (9.7 km) west of Livermore. The population was 70,285 at the 2010 census. In 2005 and 2007, Pleasanton was ranked the wealthiest middle-sized city in the United States by the Census Bureau. Pleasanton is home to the headquarters of Safeway, Inc. and Blackhawk Network. Although Oakland is the Alameda County seat, a few county offices and a courthouse are located in Pleasanton. Additionally, the main county jail is in the neighboring city of Dublin. The Alameda County Fairgrounds are located in Pleasanton where the county fair is held during the last week of June and the first week of July. Pleasanton Ridge Regional Park is located on the west side of town.

Pleasanton is reported being number 4 by USA Today in "America's 50 best cities to live in" in 2014, number 63 in Money's list of "The Best Places to Live" in 2010, and was also named one of "Americans' Top Hometown Spots" in the United States in 2009 by Forbes.

Pleasanton was named the third wealthiest city in terms of earnings in the United States by NerdWallet in 2013.

Before the establishment of Pleasanton, in the 1850s, an earlier settlement, called Alisal was there. It was located on the lands of the Rancho Santa Rita near the site of an Indian ranchera, around the Francisco Solano Alviso Adobe, called El Alisal (The Sycamores), one of the earliest houses built in the valley in 1844. It is still standing and serves as the centerpiece of the Alviso Adobe Community Park. Alisal, nicknamed "The Most Desperate Town in the West", was one of the settlements located along La Vereda del Monte that was a haunt and refuge of bandits and desperados in the era following the beginning of the California Gold Rush. Main Street shootouts were not uncommon. Banditos such as Claudio Feliz and Joaquin Murrieta would ambush prospectors on their way back from the gold rush fields and then seek refuge in Alisal. In the 1860s Procopio, Narciso Bojorques and others took refuge there.

Pleasanton is located on the lands of the Rancho Valle de San José and Rancho Santa Rita Mexican land grants. Its name came from John W. Kottinger, an Alameda County justice of the peace, who named it after his friend, Union army cavalry Major General Alfred Pleasonton. A typographical error by a U.S. Postal Service employee apparently led to the current spelling.

The reputation it had gained from its days as Alisal passed and in 1917, Pleasanton became the backdrop for the film Rebecca of Sunnybrook Farm, which starred Mary Pickford. The town was once home to Phoebe Apperson Hearst, who lived in a 50-room mansion on a 2,000 acres (8.1 km2) estate, now the site of Castlewood Country Club. 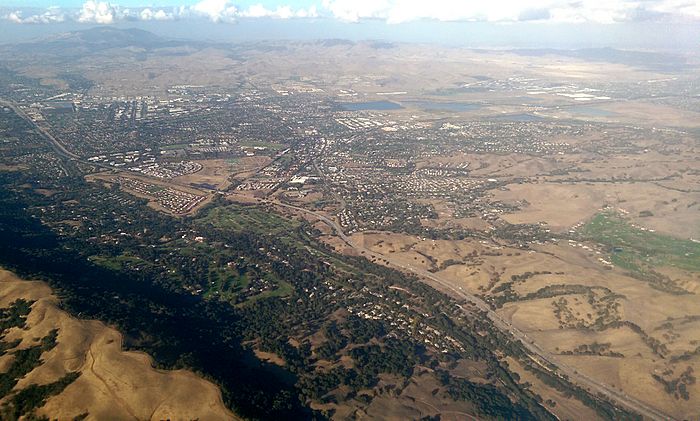 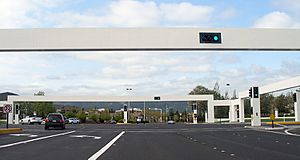 Because of the preservation of Pleasanton's historic downtown area, many examples of architectural styles dating back to the mid-19th century exist. Buildings in Gothic Revival, Pioneer, Italianate, Commercial Italianate, Colonial Revival, and Queen Anne styles can be found within walking distance of each other.

One of the icons of downtown Pleasanton is the Kolln Hardware building, located at 600 Main Street. It is designed in the Commercial Italianate style, but the prominent five-sided corner tower and a few other features are indicative of the Colonial Revival style. The structure mixes in a little bit of Queen Anne design in the tower and gable. This building was built in 1890 and has always housed a hardware store, first by the Lewis Brothers, then Cruikshank and Kolln. The hardware store has been known as Kolln Hardware since 1933. In 2004, the Kolln Hardware business shut its doors. Bud Cornett, a Pleasanton developer, purchased the landmark and has invested in its renovation and earthquake retrofit. 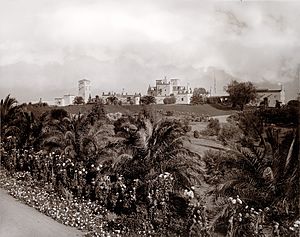 La Hacienda del Pozo de Verona (The House of the Wellhead of Verona), located in southwest Pleasanton, was an area landmark until it was destroyed in a fire in 1969. The house was built by architect A.C. Schweinfurth for William Randolph Hearst in 1898. Phoebe Apperson Hearst had the hacienda remodeled and expanded by architect Julia Morgan for use as her primary residence after her husband died. The estate was built upon a 453-acre (1.83 km2) rancheria obtained in 1886 by George Hearst, who intended to use the location for a race horse farm. Its name was inspired by the circular, carved marble wellhead purchased by Phoebe and William in Verona, Italy and installed in the middle of the courtyard. The hacienda was the only female-owned estate to be mentioned in Porter Garnett's Stately Homes of California. The architecture of the hacienda has been called California Mission style by various sources. The original architect used the term "provincial Spanish Renaissance", while Garnett wrote it would be more accurately called "Hispano-Moresque". Moorish influence was found throughout the estate, such as in the guardhouses which stood on either side of the courtyard entrance. The hacienda was topped by imported red Spanish tiles and had undecorated walls of white stucco. After Phoebe's death in 1919, William had the wellhead and other furniture and objects moved to Hearst Castle at San Simeon and sold the estate.

Pleasanton continues to maintain a small town flavor with regular events for the community. Every Saturday morning a farmers' market sets up on Angela, off Main Street. In 2009, Pleasanton appeared on Newsmax magazine's list of the "Top 25 Most Uniquely American Cities and Towns," a piece written by current CBS News travel editor Peter Greenberg. The article cited the popular farmers' market among the reasons for the city landing on the list. There are several parades during the year, commemorating Christmas, Memorial Day, and Veterans Day, as well as kicking off the beginning of the Alameda County Fair and soccer season.

The Pleasanton Downtown Association organizes the popular First Wednesday celebrations from May through September. On every first Wednesday of those summery months, Main Street is blocked to traffic and adopts a street fair atmosphere. Each First Wednesday celebration is given a different theme and planned with related activities. Typically the first theme is Cinco de Mayo since May is the first month for these street parties. At this local event, businesses and organizations from downtown and around the Tri-Valley set up booths in the center of the street. A local band performs in the Round Table Pizza parking lot, which is closed off for dancing. The parking lot is also set up as a beergarden, with beer and wine available for consumption.

Friday Concerts in the Park

Another Pleasanton Downtown Association tradition is the Friday Concerts in the Park series. Every Friday from June until September the PDA schedules different local bands to perform in the evenings at the Lions' Wayside Park off of First Street. The events are free of charge and draw a crowd. Locals will start laying out blankets in the park on Friday mornings as a way to reserve a spot.

The Alameda County Fairgrounds is a 270-acre (110 ha) facility located in Pleasanton, California. It is home to the annual Alameda County Fair, held since 1912, as well as numerous trade shows and community events. Located on its grounds, the Pleasanton Fairgrounds Racetrack was built in 1858, making it the oldest one-mile (1.6 km) horse racing track in the United States. There is a 3,000 seat amphitheater, as well as a nine-hole golf course located within the track's infield.

The Alameda County Central Railroad Society has maintained a model train exhibit at the fairgrounds since 1959, which has grown to two 15 foot by 100 foot layouts in O scale and HO scale.

The Firehouse Arts Center, opened in 2010, is a center of culture and art for Pleasanton. It features a 227-seat theater, the Harrington art gallery, and classrooms for art and drama. It is also home to the critically acclaimed teen improv comedy troupe, Creatures of Impulse.

All content from Kiddle encyclopedia articles (including the article images and facts) can be freely used under Attribution-ShareAlike license, unless stated otherwise. Cite this article:
Pleasanton, California Facts for Kids. Kiddle Encyclopedia.