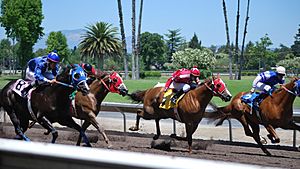 The Alameda County Fairgrounds is a 270-acre (110 ha) facility located in Pleasanton, California. It is home to the annual Alameda County Fair, held since 1912, as well as numerous trade shows and community events. Located on its grounds, the Pleasanton Fairgrounds Racetrack was built in 1858, making it the oldest one-mile (1.6 km) horse racing track in the United States. There is a 3,000 seat amphitheater, as well as a 9-hole golf course located within the track's infield.

The Alameda County Central Railroad Society has maintained a model train exhibit at the fairgrounds since 1959, which has grown to two 15 foot by 100 foot layouts in O scale and HO scale.

Building J, also known as the Amador Pavilion, is a multi-purpose arena and livestock event facility at the fairgrounds. It was briefly home to the Tri-Valley Ranchers of the National Indoor Football League. 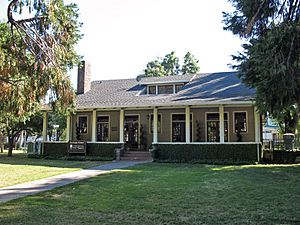 The Heathcote-MacKenzie House, also known as The Heritage House, was built on the site of the fairgrounds around 1905, to host wealthy harness racers from Canada who wintered their horses in Pleasanton. It is now on the National Register of Historic Places.

Besides the annual fair, events regularly held at the fairgrounds include:

All content from Kiddle encyclopedia articles (including the article images and facts) can be freely used under Attribution-ShareAlike license, unless stated otherwise. Cite this article:
Alameda County Fairgrounds Facts for Kids. Kiddle Encyclopedia.