Pleasanton Ridge Regional Park, located west of the I-680 freeway and the City of Pleasanton, California, became a reality in 1988, when the East Bay Regional Park District bought 1,700 acres (6.9 km2) to start what would become its second-largest park. In 1980, a real estate developer had proposed building a golf course and a number of new homes atop Pleasanton Ridge. A large number of area residents opposed the proposal and defeated it in a referendum in 1983.

In 2012, the park district announced it had purchased 1,367 acres (5.53 km2) from Robertson Ranch, east of Palomares Road, which it would add to Pleasanton Ridge Regional Park. The tract included the landmark Sunol Peak (elevation 2,163 feet (659 m). The price was reported as $6.2 million. The report stated that prior to the purchase, the regional park contained 7,500 acres (30 km2) of land.

Pleasanton Ridge Regional Park is a 5,271-acre (21.33 km2) park in the East Bay Regional Park District overlooking Pleasanton, California and the Livermore Valley to the east. The park is scheduled to grow by almost 1,500 acres (6.1 km2)(sic) with the acquisition of the Tyler Ranch.

The Tyler Ranch extends for about 3.5 miles (5.6 km) along Sunol Ridge. The north end of the ranch abutted the existing Pleasanton Ridge park at the end of Kilkare Road. It also has good access from Foothill Road. The acquisition was supported by the Priem Family Foundation, which is dedicated to preserving open space in the greater Bay Area.

EBRPD claimed that the Tyler Ranch acquisition marked the occasion when the district acquired 100,000 acres since it was formed in 1934.

Pleasanton Ridge Regional Park contains over 25 miles (40 km) of trails, most of which are dirt roads, except for the Woodland Trail, the Bay Leaf Trail, and a few sections of the North Ridge and Ridgeline trails. Park elevations range from 400 feet (120 m) at the main entrance to over 1,600 feet (490 m) at the highest point.

Adjacent to the park is the Augustin Bernal Park. 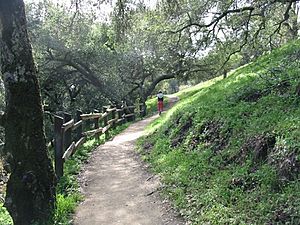 Hiking up to the ridge 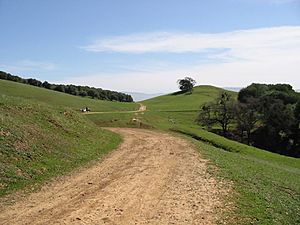 All content from Kiddle encyclopedia articles (including the article images and facts) can be freely used under Attribution-ShareAlike license, unless stated otherwise. Cite this article:
Pleasanton Ridge Regional Park Facts for Kids. Kiddle Encyclopedia.