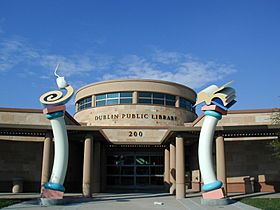 Front of the public library in Dublin

Dublin (formerly, Amador and Dougherty's Station) is a suburban city of the East (San Francisco) Bay and Tri-Valley regions of Alameda County, California, United States. Located along the north side of Interstate 580 at the intersection with Interstate 680, roughly 35 miles (56 km) east of downtown San Francisco, 23 miles (37 km) east of downtown Oakland, and 31 miles (50 km) north of downtown San Jose, it was named after the city of Dublin in Ireland. Dublin is the second fastest-growing city in the state of California, behind only Santa Clarita. The population was 46,063 (2010 census), and the 2013 estimate at 49,890. Dublin is home to the headquarters of Sybase, Inc, now part of SAP SE, Tria Beauty, Medley Health and Arlen Ness.

There were 9,325 households out of which 35.4% had children under the age of 18 living with them, 56.9% were married couples living together, 9.1% had a female householder with no husband present, and 30.2% were non-families. 21.3% of all households were made up of individuals and 2.8% had someone living alone who was 65 years of age or older. The average household size was 2.65 and the average family size was 3.13. 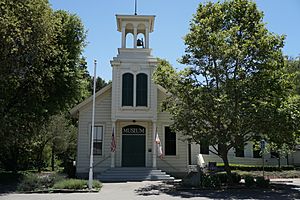 The Murray Schoolhouse was built in 1856 and moved twice to its present location in the Dublin Heritage Center.

Historic Green's Store is now used as a church.

In 1835, José María Amador was granted 16,500 acres for his service as a Mexican soldier and in Mission San Jose where he was administrator in the valley which was named Amador Valley after him. In 1850, Irish settlers bought land from Amador and founded a town.

Several historical sites are preserved and located where Dublin Boulevard is crossed by Donlan Way, itself formerly the northernmost segment of the main road to Sunol and Niles Canyon (present-day Foothill Road):

In 1960, the first housing tracts were built in West Dublin, transforming the formerly rural community into a suburb. It grew steadily from the early 1960s onward as both a residential and retail center. The City became incorporated in February 1982.

Although a post office operated from 1860 to 1908 in Dougherty, which broke off from Dublin, Dublin's first post office was opened in 1963, and is still in operation today.

The popular Discovery Channel program MythBusters has filmed over 50 episodes in Dublin at the Alameda County Sheriff's Office bomb disposal range. On December 6, 2011, a cannonball fired during a MythBusters episode being filmed at the bomb range went off target and damaged two homes and a minivan in a nearby neighborhood. The incident received coverage internationally.

Building and Development in Dublin

Dublin has caught the attention of many high-profile developers such as Rick Caruso, the creator of The Grove shopping center in Southern California.

High-end luxury shops are planned in the highly anticipated (and hotly debated) Promenade at Dublin Ranch [1].

Two dog parks (Dougherty Hills Dog Park [2] and Bray Commons [3]) already exist, and a third dog park is being planned in Jordan Ranch [4], along with other amenities.

Danville, California-based development firm Blake Hunt Ventures, is planning a 27-acre (110,000 m2) project using 13 acres (53,000 m2) which it currently owns and an adjacent property which it is purchasing from IKEA. The planned development (which the company expects to contain a specialty grocery store, a mix of restaurants, apparel stores, home goods and retailers) includes a "Main Street" running east–west through the site, a central walkway and a "town green." A TOD (Transit Oriented Development) is finishing construction near the Dublin/Pleasanton BART station.

Dublin has also undergone significant remodeling and expansion, with almost every shopping center in Dublin being remodeled while new shopping centers continued to be built [6]. Dublin Place and Dublin Retail Center were followed by Hacienda Crossings [7], The Shops at Waterford, The Shops at Tralee Village, Grafton Station, Fallon Gateway, and Persimmon Place [8].

In 2005, East Dublin opened a new K-8 school named Fallon, which is conveniently located next to the new townhomes. In 2010, however, the school began serving only grades 6-8, making it the second middle school in town.

Emerald Glen Park will be expanding with a man-made lake, walking trails, and waterslides to become the Emerald Glen Recreation & Aquatic Complex [9].

A new BART station in West Dublin began construction in 2007. The project cost $80 million and opened in March 2011. The West Dublin/Pleasanton station TOD will also include a hotel, restaurant, 210 apartments, and 170,000 sq ft (16,000 m2). of office space across the Interstate 580 freeway in Pleasanton, California.

The Dublin Edge Film Festival, also known as ArcFest, is an annual film festival and convention held in Dublin, California by the The Dublin Film Commission, which previews new films of all genres from around the world. Founded on July 17, 2004, it is the East Bay Area's most prestigious and publicized film festival.

The annual Saint Patrick's Day celebration includes a 5K Fun Run and Walk, a pancake breakfast, a festival, and a parade. The parade is popular with residents and visitors from outside Dublin alike, and has been growing in popularity each year. It is sponsored by the Dublin Host Lions Club and features bands and colorful floats. The Dublin firefighters sponsor the pancake breakfast, and tours of the firehouse are popular with children. The festival continues all weekend, and features food, games, kiddie rides, arts & crafts, and information about local organizations. The festival had been held near the end of the parade route in Shamrock Village on Amador Valley Blvd., but was relocated to the Civic Center on Dublin Blvd., in 2007, moving it closer to the growing population in the eastern part of Dublin.

In 2000, following a conflict with Mayor Guy Houston and developers of the West Dublin Hills, Morgan King and David Bewley began a ballot initiative known as Measure M. The objective of the measure was to prevent the Dublin Hills from becoming overwhelmed with housing that had been promised to voters would not be built on preserved open space. Measure M won in every precinct in Dublin and on the absentee ballots.

On December 6, 2011, shooting was in progress for the popular Discovery Channel program MythBusters, when a cannonball went skyward and zoomed through a residence near Camp Parks, where the filming was taking place, also damaging a car, which was the final resting place of the cannonball. Many residents were shaken and the community was shocked, but nobody was injured. Mythbusters Adam Savage and Kari Byron hosted a student engineering event at Dublin High School, a move to express gratitude to the community of Dublin for the access to Camp Parks as a shooting location. The Dublin Film Commission declared December 6 "Victory in the battle for Dublin", poking at the rogue cannonball incident, and plans to host a film festival every December 6 to honor Dublin's fallen cannonball. On December 6, 2012, Tri-Valley Film Coalition President Morgan Finley King hosted a film festival at the Dublin Library, in which winners of each category were awarded a "Golden Cannonball Award."

A sub-installation of Fort McCoy, Camp Parks is the only training facility within a short drive for the 11,000-plus reservists in the San Francisco Bay Area. Firing ranges and a wide variety of training facilities are available. The post is home to state-of-the-art facilities: the Regional Training Site-Intelligence, Regional Training Site-Medical and the 91st DIV Battle Projection Center. Growth is on the horizon as new facilities have been built and more are programmed for construction in the near future.

Dublin has twin city relations with the following cities

All content from Kiddle encyclopedia articles (including the article images and facts) can be freely used under Attribution-ShareAlike license, unless stated otherwise. Cite this article:
Dublin, California Facts for Kids. Kiddle Encyclopedia.