The county was formed on March 25, 1853, from a large portion of Contra Costa County and a smaller portion of Santa Clara County.

The Spanish word alameda means "a place where poplar trees grow," a name originally given to the Arroyo de la Alameda (Poplar Grove Creek). The willow and sycamore trees along the banks of the river reminded the early explorers of a road lined with trees, also known as an alameda.

The county seat at the time it was formed was located at Alvarado, now part of Union City. In 1856 it was moved to San Leandro, where the county courthouse was destroyed by the devastating 1868 quake on the Hayward Fault. The county seat was then re-established in the town of Brooklyn from 1872-1875. Brooklyn is now part of Oakland, which has been the county seat since 1873.

Much of what is now considered an intensively urban region, with major cities, was developed as a trolley car suburb of San Francisco in the late 19th and early 20th centuries. The historical progression from Native American tribal lands to Spanish, then Mexican ranches, then to farms, ranches, and orchards, then multiple city centers and suburbs, is shared with the adjacent and closely associated Contra Costa County.

The annual county fair is held at the Alameda County Fairgrounds in Pleasanton. The fair runs for three weekends from June to July. Attractions include horse racing, carnival rides, 4-H exhibits, and live bands. 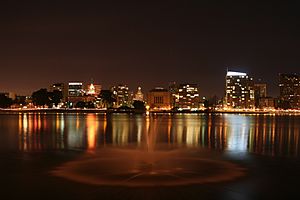 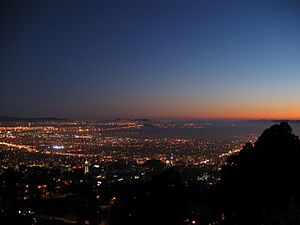 View of Berkeley and the San Francisco Bay at nightfall.

The reconstructed mission at Mission San José (located in Fremont).

The San Francisco Bay borders the county on the west, and the City and County of San Francisco, California has a small land border with the city of Alameda due to land filling. The crest of the Berkeley Hills form part of the northeastern boundary, and reach into the center of the county. A coastal plain several miles wide lines the bay; and is Oakland's most populous region. Livermore Valley lies in the eastern part of the county.

The Hayward Fault, a major branch of the San Andreas Fault to the west, runs through the most populated parts of Alameda County, while the Calaveras Fault runs through the southeastern part of the county.

The Alameda County Arts Commission, a division of the county administration, under the California Arts Council, was created in 1965. Its fifteen appointed members act in an advisory capacity to the board of supervisors, in promoting the arts. The Oakland Museum of California has a substantial collection of California art works and historical artifacts. 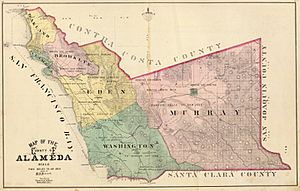 The population ranking of the following table is based on the 2010 census of Alameda County.

All content from Kiddle encyclopedia articles (including the article images and facts) can be freely used under Attribution-ShareAlike license, unless stated otherwise. Cite this article:
Alameda County, California Facts for Kids. Kiddle Encyclopedia.