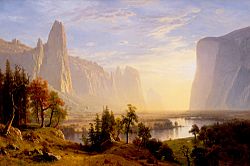 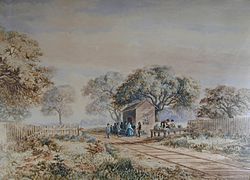 The Oakland Museum of California or OMCA (formerly the Oakland Museum) is an interdisciplinary museum dedicated to the art, history, and natural science of California, located adjacent to Oak Street, 10th Street, and 11th Street in Oakland, California. The museum contains more than 1.8 million objects dedicated to "telling the extraordinary story of California." It was created in the mid-1960s out of the merger of three separate museums dating from the early 20th century (Snow Museum of Natural History, Oakland Public Museum, Oakland Art Gallery), and was opened in 1969.

The museum building, designed by architect Kevin Roche John Dinkeloo and Associates LLC (Roche-Dinkeloo), with landscape design by Dan Kiley and gardens by Geraldine Knight Scott, is an important example of mid-century modernism and the integration of indoor and outdoor spaces. The concrete building includes three tiers, one each focusing on the art, history, and natural science collections, along with temporary exhibition galleries, an auditorium, a restaurant, and other ancillary spaces. Outdoor architectural features are terraced roof gardens, patios, outdoor sculpture, a large lawn area, and a koi pond.

Between 2009 and 2013, the museum underwent a major renovation and expansion designed by Mark Cavagnero Associates. The art and history galleries were closed from August 2009 to May 2010, followed by closure of the natural science gallery and education facilities (reopened in May 2013). Skidmore, Owings and Merrill designed the environmental graphics program for the renovation and re-branding of the museum. Core support for the capital improvements came from Measure G, a $23.6 million bond initiative passed by Oakland voters in 2002. The museum is also planning a renovation to its building's exterior facilities, which would open up the building's courtyard with a new entrance along the 12th Street side facing Lake Merritt in order to better connect the facility to the neighborhood. The $18–20 million exterior renovation is planned to be completed by Fall 2020.

The Museum holds a notable collection of paintings and decorative objects associated with the American Craftsman movement, including a large collection of paintings and decorative art by Arthur Mathews and his wife Lucia Kleinhans Mathews. The museum holds over 500 paintings, drawings, furniture, and other decorative artwork produced by Arthur and Lucia. OMCA is also home to the Matthews's archive which contains notes, sketches, and other memorabilia.

More than 1.8 million items represent California's history and cultures from the era before Europeans arrived, to the 21st century. The strongest collections are in photography; California native baskets and other material; California Gold Rush era artifacts; and material that relates to California technology, agriculture, business and labor, domestic life, and significant events such as World War II.

The Native California Basket collection encompasses an estimated 2,500 baskets from some of the geographic and cultural regions of California. One of the highlights of the collection is an Ohlone basket commissioned by the museum in 2010 and made by the Ohlone artist, Linda Yamane.

The collection of the Natural Sciences Department showcases California as a biodiversity hotspot and as the state containing the greatest biological diversity in the nation. It numbers more than 100,000 research specimens and other artifacts, including over 10,000 identified and pinned entomology specimens, over 5,000 specimens in the malacology (shell) collection, more than 2,000 bird and mammal study skins and mounts, several thousand bird eggs, more than 3,180 herbarium sheets, over 2,330 freeze-dried exhibit specimens, as well as collections of reptiles and amphibians, fishes, terrestrial and marine invertebrates, and fungi.

The Oakland Public Museum opened in the nearby Camron-Stanford House in 1910. Its first curator, Charles P. Wilcomb, gathered a collection representing two aspects of California cultural history, Native Americans and settlers from the East Coast. The Oakland Art Gallery opened in the Oakland Municipal Auditorium in 1916, originally under the auspices of the Oakland Public Museum, whose director at the time, Robert B. Harshe, was an artist. The Snow Museum of Natural History opened in the Cutting mansion, also on the shore of Lake Merritt, in 1922. Although the merged Oakland Museum focuses on California art, history and nature, some "legacy" pieces from outside the state remain, such as a collection of snuff bottles and a carved jade pagoda. 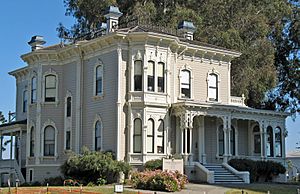 The Oakland Public Museum was originally housed in the Camron-Stanford House from 1910-1967. The house is now a separate museum.

All content from Kiddle encyclopedia articles (including the article images and facts) can be freely used under Attribution-ShareAlike license, unless stated otherwise. Cite this article:
Oakland Museum of California Facts for Kids. Kiddle Encyclopedia.