The Camron-Stanford House is the last of the 19th-century Victorian mansions that once surrounded Lake Merritt in Oakland, California. It was the home to a series of influential families, and in 1907, became the city’s first museum.

The home was built in 1871, and its first occupants were William Walker Camron and his wife, Alice (Marsh) Camron. She was the daughter of Dr. John Marsh, who was a California pioneer. Marsh was influential in encouraging wagon trains of settlers to come to California and also in its obtaining independence from Mexico. He owned the 13,000-acre Rancho los Meganos and the large, stone house of John Marsh that he built there, in what is now Marsh Creek State Park, still stands. He was killed by a disgruntled employee, and as a young woman, Alice received a large inheritance, which she used to purchase the Camron-Stanford house from its builder, Samuel Merritt. 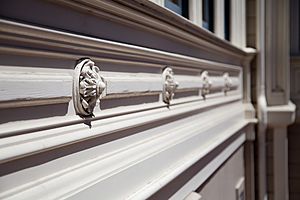 Architectural detail on the Camron-Stanford House.

Her husband, William Camron, was a deputy sheriff and was active in the Republican Party. He was appointed to a vacant seat on the Oakland City Council, and later became a member of the California State Assembly.

Next to occupy the home was the family of David Hewes. He made and lost several fortunes. He is best known for donating one of the golden spikes used in the celebration of the completion of the first transcontinental railroad at Promontory Summit, Utah in 1869.

The Josiah Stanford family owned the home from 1882-1903. Josiah Stanford was a brother of Leland Stanford, who was one of the founders of the Central Pacific Railroad, which built the portion of the first transcontinental railroad east from Sacramento to Promontory Summit.

The house has been listed on the National Register of Historic Places since June 13, 1972.

All content from Kiddle encyclopedia articles (including the article images and facts) can be freely used under Attribution-ShareAlike license, unless stated otherwise. Cite this article:
Camron-Stanford House Facts for Kids. Kiddle Encyclopedia.