John Marsh (June 5, 1799 in South Danvers, Massachusetts – September 24, 1856 in Vine Hill, California) was an early pioneer and settler in Alta California, the first Harvard graduate and the first to practice medicine there. He knew Hebrew, Latin and Greek, and was the first to compile a dictionary of the Sioux language. He became one of the wealthiest ranchers in California, and was one of the most influential men in the establishment of California statehood. 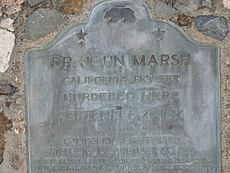 Plaque marking the site of his murder

Marsh was active in California politics. On September 24, 1856, he began a journey from his land in eastern Contra Costa County to San Francisco for a personal or political appointment. On the road between Pacheco and Martinez, he was ambushed and murdered by three of his vaquero employees over a dispute about their wages. Two of the killers were found ten years later and brought to trial. One man turned state's evidence and was released without trial. The other was convicted and sentenced to life in prison, though he was pardoned 25 years later. The third man was never caught. A California Historical Landmark (#722) plaque still marks the site of the murder.

Both John and Abigail Marsh are buried in Mountain View Cemetery, in Oakland, California. 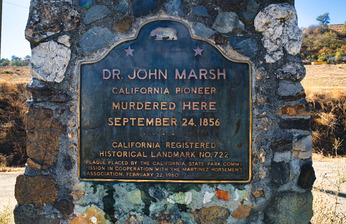 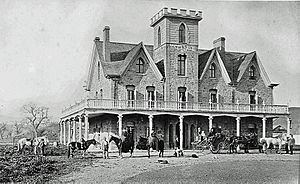 All content from Kiddle encyclopedia articles (including the article images and facts) can be freely used under Attribution-ShareAlike license, unless stated otherwise. Cite this article:
John Marsh (pioneer) Facts for Kids. Kiddle Encyclopedia.