Brentwood began as a community in the late 19th century, and still is known throughout the Bay Area for its agricultural products, primarily its cherries, corn and peaches. Due to urban sprawl many of the old farms and orchards have been replaced by suburban developments since 1990. Brentwood is increasingly residential, with the rate of population growth in the triple digits during the 1990s and 69% from 2000 through 2005.

Brentwood was originally laid out on land donated from property owned by John Marsh, an East Contra Costa County pioneer who acquired Rancho Los Meganos, the land grant that Brentwood is built upon, in 1837 from Jose Noriega. Marsh was one of the wealthiest men in California and was instrumental in its becoming independent from Mexico and part of the United States. His letters extolling the potential for agriculture in California were published in newspapers throughout the East. They resulted in the first wagon trains to California. Marsh encouraged this, and allowed new arrivals to stay on his ranch until they could get settled. Rancho Los Meganos became the terminus of the California Trail. Brentwood was named after Marsh's ancestral home, the town of Brentwood in the County of Essex, England.

Brentwood's first post office was established in 1878. The city incorporated in 1948.

Balfour, Guthrie & Co., a British investment company, purchased the John Marsh ranch in 1910. The company invested heavily in other California agricultural properties as well. In 1910, it built the Brentwood Hotel at Oak Street and Brentwood Boulevard, across from the railroad station. This replaced an earlier hotel on the same site that had burned down in 1903. The hotel was razed in 1967, and replaced by a service station.

The Brentwood water tower perhaps symbolizes the city's transition from a rural farm community to a modern bedroom community. This landmark on Walnut Boulevard, across the street from the Brentwood Park and Ride lot, is the tallest structure in the city. It is no longer used for its original purpose, but now serves as a cell phone tower. City water is stored in large tanks atop hills outside the city.

The city is bordered on three sides by the Contra Costa County Agricultural Core which consists of 11,000 acres of preserved and still actively productive farm land.

During the 1990s, many types of retail stores were built along the Brentwood/Antioch border on Lone Tree Way, on both sides of SR 4 B, about 3.5 miles (5.6 km) from downtown Brentwood. The Streets of Brentwood, an outdoor lifestyle retail center, opened in Brentwood in 2008.

The city broke ground for a new civic center in November, 2009. The Mission-style architectural inspiration for City Hall, the main building, was the 1910 Brentwood Hotel. The $60 million project, completed in May 2012, includes the 58,000-square-foot City Hall and state-of-the-art City Council Chambers, a 32,000-square-foot community center, 280-space parking garage and redevelopment of the 2½-acre City Park. The community center also includes arts and crafts rooms as well as studios for dance classes and community exercise programs. The center received a Leadership in Energy and Environmental Design (LEED) Silver certification for amenities such as green roofs, bioswales, permeable paving and infiltration planters. City departments began moving into the new facility in October 2011, and the former city hall was demolished during November 2011. 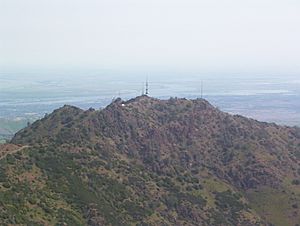 Photo of Mount Diablo, showing Brentwood behind the mountain and to the right).

As is common with many East Bay towns in Contra Costa County, Mount Diablo is clearly seen from Brentwood. Brentwood is located on the alluvial plain of the Sacramento-San Joaquin Delta. In the picture shown at right, Brentwood lies center right and the city of Antioch lies center left. North Peak appears in the foreground between the two cities and largely hides the city of Oakley.

Brentwood borders on the Mediterranean (Csa) and Semi-arid climates (Bsh). Like most of East Contra Costa County, Brentwood lies in the rain shadow of Mt. Diablo and receives less rainfall than many of its neighbors. The wet season is generally October through April, though there may be a day or two of light rainfall in June or September. Summer heat is often moderated by the Delta Breeze, especially in the late afternoon, causing temperatures to cool rapidly.

Public transportation is very limited, so the principal roads leading into the city are very congested with commuter traffic. No freeways served Brentwood directly, until February 2008, when the John Marsh Heritage Highway (also known as the California State Route 4 Bypass or Bypass Road, now California State Route 4) was built to connect the western side of Brentwood directly with Antioch. State Route 4 passes by the western edge of Brentwood. The freeway portion of SR 4 ends just south of the Sand Creek Road exit. SR 4 continues as a two-lane highway to its intersection with Marsh Creek Road and the end of Vasco Road, an unnumbered highway that is the principal route to Livermore, Interstate 580, and the Silicon Valley. To the southeast of Brentwood, County Route J4, known as the Byron Highway, connects to Tracy and the San Joaquin Valley.

Local bus service is provided by Tri Delta Transit, a special purpose district providing public transportation for Eastern Contra Costa County. This district also operates express bus service to the Pittsburg/Bay Point and the Pleasanton/Dublin BART rail stations Monday through Friday, several a day, and only in the predominant commute direction. Due to a route with a number of bus stops, it takes about one hour for the bus to reach Pittsburg/Bay Point BART from the Brentwood Park & Ride lot on Walnut Street.

A light rail Bay Area Rapid Transit expansion from Bay Point to Hillcrest Avenue, serving East Contra Costa County, known as eBart, is in progress and scheduled for completion in 2017.

Commercial airports serving this area are:

Other nearby airports serving private aircraft are:

Brentwood was one of 212 cities designated by KaBOOM! as a Playful City USA for 2010 - one of only 23 such cities in California and only three in Northern California. This is the seventh consecutive year that Brentwood has been listed. Each community selected demonstrated creative commitments to the cause of play and fitness. Brentwood was selected for a variety of reasons, including the fact that it offers the community its Wellness Policy, a community-wide aspirational goal which promotes physical activity and education as the benefits of living a healthy lifestyle. Brentwood has 68 parks and 17 smaller pocket parks within nearly 12 square miles (31 km2), and miles of jogging trails, to support healthy lifestyles.

The visual and performing arts are well represented in Brentwood. The city is home to the Brentwood Art Society, which sponsors events such as the annual Art, Wine, and Jazz Festival, the Artists Open Studio Tour, open mic nights, and other gatherings and shows. The Art Society is also a supporter of the Brentwood Theater Company, which since 2010 has been producing Broadway musicals and musical reviews in venues around the city. In spring 2014, a major art gallery was opened in the Streets of Brentwood shopping center.

All content from Kiddle encyclopedia articles (including the article images and facts) can be freely used under Attribution-ShareAlike license, unless stated otherwise. Cite this article:
Brentwood, California Facts for Kids. Kiddle Encyclopedia.