Alameda Creek (Spanish: Arroyo de la Alameda) is a large perennial stream in the San Francisco Bay Area. The creek runs for 45 miles (72 km) from a lake northeast of Packard Ridge to the eastern shore of San Francisco Bay by way of Niles Canyon and a flood control channel.

Five Spanish expeditions led by Portolà, Ortega, Fages, Anza and Amador passed over Alameda Creek between 1769 and 1795. El Camino Viejo between Pleasanton and Mission Pass crossed it near Sunol. Mission San José, in Fremont, was dedicated in 1797. The Mission thrived for 49 years until the Mexican Government's Secularization Order liquidated mission lands in 1834. Alameda Creek was the boundary of the mission lands and the 17,000-acre (69 km2) Rancho Arroyo de la Alameda granted to Jose de Jesus Vallejo, who built a flour mill near the mouth of Niles Canyon. The mill and the importance of the canyon as a passage through the hills led to growth of Niles (which in 1956 became part of Fremont, California) in the 1850s. A favorable climate, excellent soils, and a fast-growing population helped agriculture to boom. Early roads led to landings where small ships would load grain and other foodstuffs for transport to market. 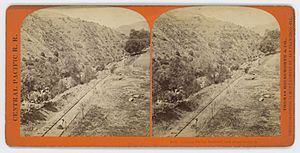 The creek bed had once been used as a gravel quarry. When the gravel pits were flooded by water purchased by the public for groundwater recharge of the Niles Cone, the gravel harvesters began to daily pump out enough water to meet the needs of 30,000 people down the creek into San Francisco Bay. After the pumping was declared to be an illegal waste the Alameda County Water District acquired the quarry in 1975.

In May 2015, vandals damaged an inflatable dam across the creek in Fremont, releasing 50 million gallons (190 million litres) of drinking water into San Francisco Bay. 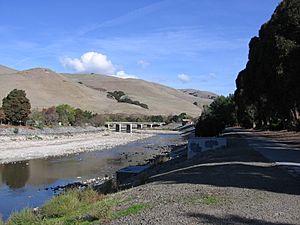 Alameda Creek at the flats of Niles where it has emerged from the Niles Canyon.

Alameda Creek is the largest watershed within the southern San Francisco Bay, draining 700 square miles (1,813 square kilometers), or about 20% of the total drainage area for the south Bay. Two-thirds of the watershed is in Alameda County including the reach through the Sunol Valley, the rest is in Santa Clara County. The tributaries of Alameda creek include Arroyo de la Laguna, Arroyo Valle, San Antonio Creek and Calaveras Creek, whose main tributary is Arroyo Hondo. The watershed includes three man-made reservoirs: Lake Del Valle, San Antonio Reservoir and Calaveras Reservoir.

The Alameda Creek Watershed can be divided into six major reaches:

Ecology, past and present 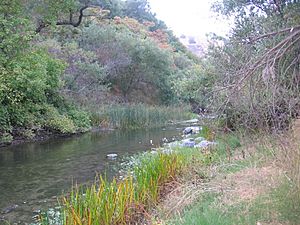 Alameda Creek historically supported steelhead (the anadromous form of the coastal rainbow trout Oncorhynchus mykiss irideus), coho salmon (Oncorhynchus kisutch) and chinook salmon (Oncorhynchus tshawytscha). Confirmation that adult steelhead recently captured attempting to migrate into the Alameda Creek watershed, and the rainbow trout sampled in the upper watershed (trapped above complete migration barriers), are native fish that have their closest genetic associations with other populations within the federally threatened steelhead Central California Coast Evolutionarily Significant Unit has spurred a major effort to restore this historically important steelhead stream by removing barriers to migration and improving habitat quality. Since steelhead in the Bay Area and California's Central Coast were listed as threatened under the Endangered Species Act in 1997, numerous organizations, including the Alameda Creek Alliance, and governmental agencies have cooperated on restoration projects to allow migratory fish from the Bay to reach spawning habitat in upper Alameda Creek, beginning in 1999.

Alameda Creek is considered a potential ‘anchor watershed’ for steelhead, regionally significant for restoration of the threatened trout to the entire Bay Area, although by the late 1950s the California Department of Fish and Game decided the steelhead run was no longer viable due to numerous man-made barriers to fish runs. By the early 1970s the Army Corps of Engineers channeled and rip-rapped the lower 12 miles (19 km) of the creek. The last steelhead and coho salmon runs were seen in the lower creek in 1964. In 2009, the Alameda County Water District removed a rubber dam that blocked trout passage in the lower creek, adjacent to Quarry Lakes Regional Park. In June, 2010 environmentalists and water district officials celebrated the removal of a dam on Alameda Creek in Fremont, and the planned installation of fish ladders to allow salmonids to bypass two other dams on the lower creek. At the same time, PG&E is working to modify a cement barrier farther upstream in Sunol to help steelhead swim farther into the watershed, water officials said. Ground was broken on the first ladder the Alameda County Water District is building in April 2018 and is just west of the Mission Boulevard overcrossing in the Niles district of Fremont, allowing passage around a rubber dam. The second ladder, which should start construction in 2019, is about a mile downstream at the concrete structure, called a weir. The two ladders are funded by nearly $10 million in grants from several agencies, including $5.36 million from the California Wildlife Conservation Board and $3 million from the California Natural Resources Agency. When those projects are completed in 2021, steelhead will be able to migrate upstream to spawning habitats in the Sunol Valley for the first time in a half-century.

California's archaeological record has contributed to knowledge of the prehistoric distribution of fishes in Alameda Creek and its tributaries including Sacramento perch (Archoplites interruptus), Sacramento suckers (Catostomus occidentalis occidentalis), Tule perch (Hysterocarpus traskii), Hitches (Lavinia exilicauda), Hardheads (Mylopharodon conocephalus), Sacramento blackfish, and Sacramento pikeminnow (Ptychocheilus grandis). Many of these fishes still occupy the creek, although the number of introduced exotic fishes continues to increase. Exotic fish species such as the largemouth and Smallmouth basses (Micropterus salmoides and Micropterus dolomieui) respectively, were introduced to Alameda Creek (and the Napa River) by Livingston Stone in 1874. 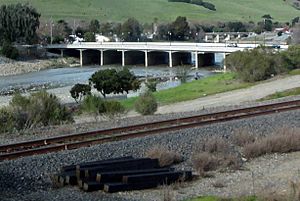 A view of the Mission Blvd bridge at Alameda Creek.

There is historical evidence of beaver in the Alameda Creek watershed. In 1828 fur trapper Michel La Framboise travelled to "the missions of San José, San Francisco Solano and San Rafael Arcángel. La Framboise stated that "the Bay of San Francisco abounds in beaver", and that he "made his best hunt in the vicinity of the missions". Alexander Roderick McLeod reported on the progress of the first Hudson's Bay Company fur brigade sent to California in 1829, "Beaver is become an article of traffic on the Coast as at the Mission of St. Joseph alone upwards of Fifteen hundred Beaver Skins were collected from the natives at a trifling value and sold to Ships at 3 Dollars". In the 1840s Kit Carson was granted rights to trap beaver on Alameda Creek in the East Bay where they "abounded...from the mouth of its canyon to the broad delta on the bay". Physical evidence of beaver include faunal remains in the Arroyo de la Laguna tributary recovered in an archaeological site west of Interstate 680. Beaver may be beneficial to efforts to restore salmonids in Alameda Creek as beaver ponds benefit oversummering salmonid smolts by raising the water table which then recharges streams in the dry summer season and also by providing perennial deep pools when streams are only seasonal.

In January, 2011, the San Francisco Public Utilities Commission won approvals to construct a replacement dam just downstream from the existing earthen Calaveras Dam, which has been maintained at 40% of capacity because of seismic concerns. However, construction of a fish ladder to provide steelhead (Oncorhynchus mykiss) access to the waters above the dam were deemed not feasible because at 290 feet (88 m), it would be the tallest fish ladder in the country, and would cost $40 million. Steelhead have not had access to spawning streams above Calaveras Dam since it was built in 1925. However, environmentalists won concessions from the SFPUC to assure adequate water releases from the new dam to improve summer flows as well as a smaller fish ladder around a diversion dam blocking access to upper Alameda Creek, which is regarded as prime trout habitat. The San Francisco Public Utilities Commission removed two disused dams in the Niles Canyon reach of Alameda Creek to improve fish passage following assessing impacts in an Environmental Impact Report under CEQA.

Downstream of San Francisco's dams, the Alameda Creek Alliance has helped to initiate the removal of 11 barriers to fish passage since 2001.

The Alameda Creek Regional Trail runs along Alameda Creek for 12 miles (19 km). The trail starts in the Niles neighborhood of Fremont and continues westward to the San Francisco Bay through the cities of Union City and Newark. The trail consists of two parallel paths, one on each side of Alameda Creek. The path on the south side of the creek is paved, and can be used by pedestrians and bicyclists. The path on the north side of the creek is unpaved, and can be used by pedestrians, bicyclists, and equestrians. The trail provides direct access to Coyote Hills Regional Park and Quarry Lakes Regional Recreation Area.

All content from Kiddle encyclopedia articles (including the article images and facts) can be freely used under Attribution-ShareAlike license, unless stated otherwise. Cite this article:
Alameda Creek Facts for Kids. Kiddle Encyclopedia.