Alameda Terminal (a.k.a. Alameda Wharf) was a railroad station and ferry wharf at the foot and west of present-day Pacific Avenue and Main Street in Alameda, California, on the eastern shore of San Francisco Bay with ferry service to San Francisco. It was built in 1864 and operated by the San Francisco and Alameda Railroad. In 1869, it served as the original west coast terminus of the U.S. First Transcontinental Railroad, until the opening of Oakland Pier two months later. The western terminus was inaugurated September 6, 1869, when the first Western Pacific through train from Sacramento reached the shores of San Francisco Bay at Alameda Terminal, thus completing the first transcontinental railroad to the Pacific coast. 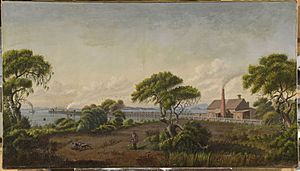 In 1863, Alfred A. Cohen, a San Francisco lawyer, along with his associates, formulated plans to build a railroad and wharf to carry passengers not only to Alameda, but also by ferry to San Francisco. In 1864, he built a 3,750-foot-long wharf, starting from a spot near today's Pacific Avenue and Main Street westward, into the Bay at that time, and ending at part of today's Alameda Point where the USS Hornet sits anchored. On August 25, 1864, Cohen inaugurated passenger service, for 25 cents, from the wharf at Vallejo and Davis Street in San Francisco, via the leased river packet Sophie MacLane, to the Alameda Wharf and then five miles to his San Francisco and Alameda Railroad High St station. In September 1864, he leased the slightly larger Contra Costa. As business grew, he replaced the leased boat, in February 1866, with his very own ferry boat, the Alameda.

By 1866, Western Pacific had built 20 miles (32 km) of track north and east from San Jose, reaching halfway into Niles Canyon, to about Farwell near MilePost33. The Western Pacific used 500 Chinese laborers to grade and construct the rail line into the rugged canyon with its tight curves and narrow banks. Construction was then halted because of disagreements between the railroad’s contractors and its financiers.

In 1868, Central Pacific Railroad, a subsidiary of which had acquired the Western Pacific and Oakland Point, restarted work on the Western Pacific Railroad line starting at Sacramento working southward, as well as near Lathrop and Livermore, using upwards to 2,000 Chinese laborers. The new plan was to connect with Oakland and Oakland Point with its ferry service to San Francisco. After the golden spike ceremony at Promontory Summit, work resumed in June 1869 in Niles Canyon with track laying towards Livermore. Also in June 1869, J. H. Strobridge came to Niles (then Vallejo Mills and now part of Fremont) to oversee the construction of the new line, with his crew of up to 600 Chinese laborers, heading towards Oakland. By midsummer, Governor Stanford made known his hopes that the line be finished in time for the opening of the State Fair on September 6th. Thus in September 1869, a temporary connection was made at the bay side (west of Alvarado and Davis Sts) of San Leandro with the old tracks of San Francisco and Alameda Railroad, which led to the SF&A Alameda Wharf with ferry service to San Francisco.

On September 6, 1869, the first Western Pacific train reached the shores of San Francisco Bay at Alameda Terminal, thus achieving the transcontinental Pacific Railroad envisioned in the 1862 Pacific Railroad Act. According to the Daily Alta California, this first through train left Sacramento at 10 am, got delayed by some construction trains, exited Niles Canyon late at 9:30 pm, and an hour later arrived at Alameda Terminal to a cheering crowd. Continuing passengers boarded the ferry Alameda and crossed the Bay to the Davis St Wharf in San Francisco.

The steamer Oakland, strengthened and converted into a car ferry capable of carrying up to four freight cars at one time, also began service in September 1869, from Alameda wharf to the San Francisco freight slip.

Two months later, Central Pacific Railroad switched the western transcontinental terminus to its expanded Oakland Pier, which was inaugurated on November 8, 1869, in another round of celebration. Alameda then went back to local passenger train service. Freight service from Alameda continued until 1870 when the freight slip at Oakland wharf and the new line through First Street, Oakland, were completed. In 1870 the SF&A was absorbed into Central Pacific and in 1873 the original SF&A pier was abandoned. 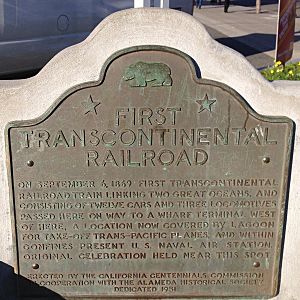 The railroads and their wharfs are gone from Alameda. The last rails were removed in 1960 from Lincoln Ave (formerly Railroad Ave and along which the SF&A rails ran).

On 6 September 2019, a "golden spike" ceremony was held in Niles Canyon, where the Western Pacific tracks laid in 1866 was linked with the Central Pacific tracks laid in 1869, commemorating the 150th anniversary of the 6 September 1869 completion of the first transcontinental railroad to the Pacific coast terminus at Alameda Terminal. Also, the mayor of the City of Alameda issued a proclamation recognizing "the outstanding contributions of the many Chinese immigrants who helped make the Transcontinental Railroad a reality".

All content from Kiddle encyclopedia articles (including the article images and facts) can be freely used under Attribution-ShareAlike license, unless stated otherwise. Cite this article:
Alameda Terminal Facts for Kids. Kiddle Encyclopedia.