San Leandro is a suburban city in Alameda County, California, United States. It is located on the eastern shore of San Francisco Bay, between Oakland to the northwest and Hayward to the southeast.

The first inhabitants of the geographic region which would eventually become San Leandro were the ancestors of the Ohlone people, who arrived sometime between 3500 and 2500 BC.

The smaller, Rancho San Leandro, approximately 9,000 acres (3,600 ha), was given to José Joaquín Estudillo in 1842. The larger, Rancho San Antonio, approximately 44,000 acres (18,000 ha) was given to another Spanish soldier Don Luis Maria Peralta in 1820. Beginning in 1855, two of Estudillo's sons-in-law, John B. Ward and William Heath Davis, laid out the town site that would become San Leandro, bounded by the San Leandro Creek on the north, Watkins Street on the east, Castro Street on the south, & on the west by the longitude lying a block west of Alvarado Street. The city has a historic Portuguese population dating from when immigrants from the Azores and laborers from Hawaii began settling in the city in the 1880s and established farms and businesses. By the 1910 census, they had accounted for nearly two-thirds of San Leandro's population.

In 1856 San Leandro became the county seat of Alameda county, but the county courthouse was destroyed there by the devastating 1868 quake on the Hayward Fault. The county seat was then re-established in the town of Brooklyn (now part of Oakland), California in 1872.

During the Civil War San Leandro and its neighbor, Brooklyn, fielded a California militia company, the Brooklyn Guard.

San Leandro was one of a number of suburban cities built in the post-World War II era of California that had restrictive covenants, which barred property owners in the city from selling properties to African Americans and other minorities. As a result of the covenant, In 1960, the city was almost entirely white (99.3%), while its neighbor city of Oakland had a large African American population. The United States Supreme Court, in Shelley v. Kraemer, later declared such covenants unenforceable by the state. San Leandro was an 86.4% white-non Hispanic community according in the 1970 census. The city's demographics began to diversify in the 1980s. By 2010, Asian Americans had become a plurality population in San Leandro, with approximately one third of the population, with non-Hispanic Whites accounting for 27.1% of the population.

The San Leandro Hills run above the city to the northeast. In the lower elevations of the city, an upper regionally contained aquifer is located 50 to 100 feet (15 to 30 m) below the surface. At least one deeper aquifer exists approximately 250 feet (75 m) below the surface. Some salt water intrusion has taken place in the San Leandro Cone. Shallow groundwater generally flows to the west, from the foothills toward San Francisco Bay. Shallow groundwater is contaminated in many of the locales of the lower elevation of the city. Contamination by gasoline, volatile organic compounds and some heavy metals has been recorded in a number of these lower elevation areas.

The trace of the Hayward Fault passes under Foothill Boulevard in San Leandro. Follow the link in the reference to see a series of photos of the fault cutting the asphalt between 1979 and 1987. 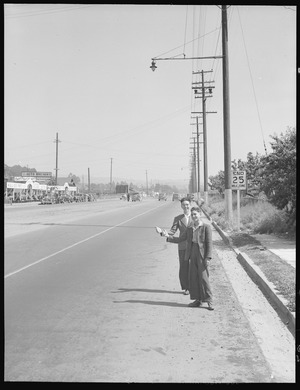 According to the 2000 census, there were 30,642 households out of which 28.8% had children under the age of 18 living with them, 47.1% were married couples living together, 12.7% had a female householder with no husband present, and 35.3% were non-families. 28.5% of all households were made up of individuals and 11.6% had someone living alone who was 65 years of age or older. The average

San Leandro is served by the Interstate 880, 580 and 238 freeways connecting to other parts of the Bay Area. East 14th Street is a major thoroughfare in downtown and continues towards East Oakland and Hayward. Davis Street is also another major street that intersects East 14th Street in downtown before heading towards the San Francisco Bay. Public transportation is provided by the Bay Area Rapid Transit BART District with the San Leandro and Bayfair stations servicing the city. San Leandro LINKS provides free bus shuttle service for the western part of the city to the San Leandro BART station and AC Transit is the local bus provider for the city. A senior-oriented local bus service, Flex Shuttle, also operates within the city, as does East Bay Paratransit, which provides shuttle type transportation to residents with disabilities. 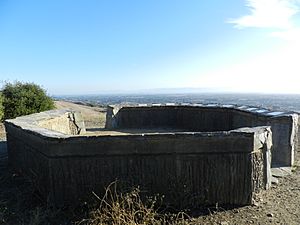 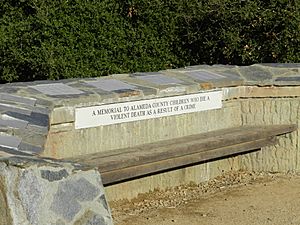 The San Leandro Marina, which contains group picnic areas and trails, as well as docking facilities, is part of the San Leandro Shoreline Recreation Area. In addition to Marina Park, the City of San Leandro maintains and services 16 other parks throughout the city, all of which are available for use by residents and visitors alike. The Department of Recreation and Human Services for the City of San Leandro also staffs and maintains the Marina Community Center, the San Leandro Senior Community Center and the San Leandro Family Aquatic Center. Adjacent Lake Chabot Regional Park is popular for its scenic hiking trails, camping, and fishing. At the Fairmont Ridge Staging Area of the park is the Children's Memorial Grove, which consists of an Oak grove and a stone circle, with annual plaques listing the names of all children who have died as a result of violence in Alameda County.

All content from Kiddle encyclopedia articles (including the article images and facts) can be freely used under Attribution-ShareAlike license, unless stated otherwise. Cite this article:
San Leandro, California Facts for Kids. Kiddle Encyclopedia.