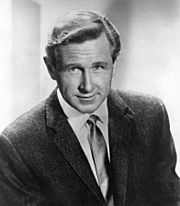 Lloyd Vernet Bridges, Jr. (January 15, 1913 – March 10, 1998) was an American television, radio, voice, stage, and movie actor who is mostly known for his role as Mike Nelson in Sea Hunt and for being the father of Jeff Bridges and Beau Bridges.

He was born on January 15, 1913 in San Leandro, California. His career stated in 1936 and would last until his death in 1998. Bridges was married to Dorothy Simpson from 1938 until his death in 1998, they had 4 children (including Jeff Bridges and Beau Bridges) one son died at birth. He has a grandson Jordan Bridges (the son of Beau Bridges). Bridges died on March 10, 1998 in Los Angeles, California from natural causes, he was 85 years old. He was cremated.

All content from Kiddle encyclopedia articles (including the article images and facts) can be freely used under Attribution-ShareAlike license, unless stated otherwise. Cite this article:
Lloyd Bridges Facts for Kids. Kiddle Encyclopedia.