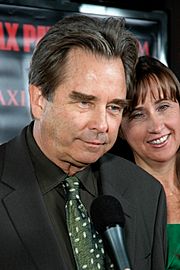 Lloyd Vernet "Beau" Bridges III (born December 9, 1941) is an American movie, television, stage, voice actor and movie director who is known for his role as Frank Baker in The Fabulous Baker Boys. He has won two Emmy Awards and two Golden Globe Awards.

Bridges was born on December 9, 1941 in Los Angeles, California to Lloyd Bridges and to Dorothy Simpson. He studied at the University of Hawaii and the University of California, Los Angeles. Bridges was married to Julie Landfield from 1964 until they divorced in 1984. Then he was married to Wendy Treece since 1984. He has 2 children with Landfield and 3 with Treece. His brother is actor Jeff Bridges.

All content from Kiddle encyclopedia articles (including the article images and facts) can be freely used under Attribution-ShareAlike license, unless stated otherwise. Cite this article:
Beau Bridges Facts for Kids. Kiddle Encyclopedia.