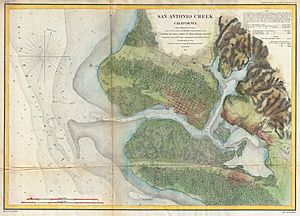 Brooklyn first formed from the amalgamation in 1856 of two settlements, the sites of which are both now within the city limits of Oakland: San Antonio and Clinton. The name Brooklyn commemorated the ship that had brought Mormon settlers to California in 1846. In 1870, Brooklyn absorbed the nearby town of Lynn, which housed a footwear industry, and incorporated as a city.

The San Francisco and Oakland Railroad had built a station at San Antonio. When the Central Pacific Railroad took over the line in 1870, the name was changed to Brooklyn.

In 1872, voters approved their city's annexation by Oakland. Afterward, when the Southern Pacific Railroad took over the rail line in 1883, the Brooklyn station name was changed to East Oakland.

A post office was opened in Brooklyn in 1855; it became a branch of the Oakland post office in 1878. Coordinates for the former location of Brooklyn as shown on this page were obtained from the USGS Geographic Names Information System (GNIS).

All content from Kiddle encyclopedia articles (including the article images and facts) can be freely used under Attribution-ShareAlike license, unless stated otherwise. Cite this article:
Brooklyn, California Facts for Kids. Kiddle Encyclopedia.