East Oakland is the southeastern portion of Oakland, California, and takes up the largest portion of the city's land area. It stretches between Lake Merritt in the northwest and San Leandro in the southeast. 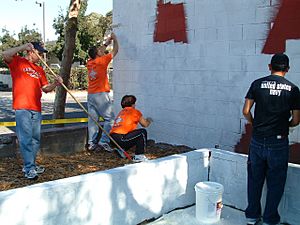 Today's International Blvd. was called the Oakland-San Leandro Road in the 19th century, a county road connecting Oakland with San Leandro. Along this road, small settlements developed with names such as Melrose, Elmhurst and Fitchburg. All these were annexed by the city of Oakland after the 1906 San Francisco Earthquake. After annexation, the Oakland-San Leandro Road was renamed East 14th Street, a name which lasted for most of the 20th century, until it was renamed International Blvd. Both Foothill Boulevard and MacArthur Boulevard, which run through the heart of East Oakland, were a part of the Lincoln Highway, the first transcontinental highway, from 1913 until 1927. MacArthur Blvd. was the main route from San Francisco, until it was replaced by the MacArthur Freeway (580) over most of the same route.

The area known as Brooklyn (until it was also annexed by the city in 1909) was once suburban and predominantly white until World War II, when it became the backbone of Oakland's African American community due to an influx of workers from the southeastern U.S. and the exodus of more prosperous whites to suburbs south and east of the city, such as San Leandro, Hayward and Walnut Creek. In the 1950s and 1960s, many areas of East Oakland remained predominantly white. In recent decades, the African American population has been steadily declining (as more middle-class African Americans are seeking opportunities in the very same nearby suburbs white residents moved to years earlier, and even outside of the Bay Area altogether) and is being replaced by a Latino and Asian (primarily Cambodian, Lao, and Chinese) population. Fruitvale has become the backbone of Oakland's Latino community. A diverse Asian population, including Chinese, Vietnamese, Laotian, and other southeast Asian ethnic groups generally inhabit the area of East Oakland closest to downtown, from Chinatown east to San Antonio. Blacks still maintain majority status in East Oakland, where they represent over 54% of East Oakland's residents. The deep east side has a population of roughly 15,000 and is 63% Black thus giving it the highest concentration of African-Americans in Northern California and the highest concentration of Blacks in California outside of Los Angeles.

East Oakland, together with West Oakland and portions of North Oakland, is a hub for Northern California's African American community. Hip hop culture is associated with East Oakland. It is known within the hip hop community as "Oaktown", "O-Town," (old school names) or currently, "The Town". A number of East Bay rappers and singers such as Raphael Saadiq, Keak da Sneak, Dru Down, Too Short, Digital Underground, MC Hammer, Luniz, Hieroglyphics, Keyshia Cole, Philthy Rich, Db tha General, Shady Nate, and Bobby Brackins, originated there. Too Short was also one of the first rap artists to promote and sell records independently and is one of the pioneers responsible for the birth of Northern California's independent hip hop scene; leading other artists to pursue success in the music industry without the assistance of a major record company. The sound of the music was different from East Coast hip hop, which is known for its technique of sampling and looping to create a song. Instead, funk and blues were infused with synthesizers and drum machines, giving birth to the Bay Area hip hop sound known as Mobb music. Today, mainstream hip-hop continues to lyrically and musically incorporate much of what was pioneered in East Oakland.

Elmhurst was originally a separate town, it was annexed by Oakland in 1909, and today is considered part of East Oakland. Although it was historically a white working-class neighborhood, it became predominantly African American after World War II, and today, Latinos now form about half of Elmhurst's population. Elmhurst was the site of one of the large carbarns for the Key System's streetcars, the Elmhurst Carhouse. Chevrolet opened an auto assembly plant in Elmhurst in 1915, which shut down in the 1960s.

Located near the Oakland International Airport. The main streets are 98th Avenue and Edes Avenue. The Brookfield district is located from 98th-85th Avenues. Brookfield Village stops at the Union Pacific (formerly Southern Pacific) train tracks after Railroad Street. Brookfield Village was built during World War II in response to the influx of workers needed for the war industries, on land which had been zoned for industrial uses.

All content from Kiddle encyclopedia articles (including the article images and facts) can be freely used under Attribution-ShareAlike license, unless stated otherwise. Cite this article:
East Oakland, Oakland, California Facts for Kids. Kiddle Encyclopedia.