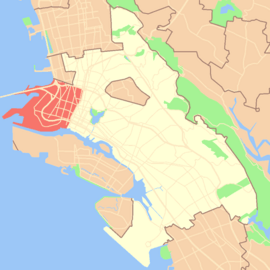 West Oakland highlighted within the City of Oakland.

West Oakland is a neighborhood situated in the northwestern corner of Oakland, California, Untied States, situated west of Downtown Oakland, south of Emeryville, and north of Alameda. The neighborhood is located along the waterfront at the Port of Oakland and at the eastern end of the San Francisco–Oakland Bay Bridge. It lies at an elevation of 13 feet (4 m).

The land which comprises part of West Oakland was granted to Luis Maria Peralta in 1820. In the 1850s, a group of men who had been leasing the land from his son Vicente, Horace Carpentier, Edson Adams, and Andrew J. Moon, began illegally selling small farm plots west of what is now Market Street. One of the squatters, Horace Carpentier became Oakland's first mayor in 1854. The population grew after 1863, when the San Francisco-Oakland railroad connected central Oakland to the San Francisco bay ferries. In 1869, West Oakland became the terminus of the transcontinental railroad, and the population grew again as railroad workers settled in the neighborhood.

In the 1880s and 1890s, a large number of shops and small and medium-sized houses were built to accommodate the large number of European Americans, African Americans, Portuguese, Irish, Mexicans, Japanese, and Chinese immigrants who settled in West Oakland. Many African Americans were employed as porters for the Pullman Palace Car Company, and the headquarters of their union, the Brotherhood of Sleeping Car Porters, was at 5th and Wood Streets. The writer Jack London lived in West Oakland in the late 19th century, and his novel Valley of the Moon is set in West Oakland. Many of the houses built in that period are still standing today and make up the quaint character of the neighborhood. Oakland's baseball team, the Oakland Oaks, played at the Oakland Baseball grounds West Oakland in 1879. In 1906, many people left homeless by the 1906 San Francisco earthquake settled in West Oakland. The original wooden train station at 16th and Wood Streets was replaced in 1912 by a large Beaux Arts structure which is still standing, though it was severely damaged in the 1989 Loma Prieta earthquake.

World War I brought new job opportunities in the shipyards and with it an influx of workers and business growth. By 1930, West Oakland was a thriving, predominately African-American neighborhood of about 2800 residents. Seventh Street was lined with jazz and blues clubs. Marcus Garvey's Universal Negro Improvement Association had its West Coast headquarters at 8th and Chester Streets.

West Oakland experienced a decline in the Depression in the late 1930s, and some residential areas became dilapidated. In the 1940s and 1950s, dozens of blocks were bulldozed and replaced with public housing projects. The 1940s and World War II saw a new influx of workers for the shipbuilding industry and the newly constructed Oakland Army Base and Naval Supply Center.

As the railroads declined and Americans turned to the automobile for transportation in the 1950s, many employees moved away. When the Cypress Freeway, a double-decker freeway connecting the San Francisco–Oakland Bay Bridge with the Nimitz Freeway, was built in the 1950s above Cypress Street, it effectively split the neighborhood in half and isolated it from downtown Oakland. In the late 1960s and early 1970s, block after block was razed and thousands of residents were displaced for the building of the massive Oakland Main Post Office, the West Oakland BART Station, and the Acorn Plaza housing project. These projects coincided with a period of economic decline characterized by unemployment, poverty, and urban blight.

Groups of African American residents of West Oakland mobilized to resist the "urban renewal" projects during this period. The Black Panthers grew out of this resistance and West Oakland became the center of the Black Panthers in the late 1960s. Their main office was on Peralta Street, and they distributed free breakfasts to children in St. Augustine's church on West Street. DeFremery Park was the site of Black Panther rallies and social programs. The east end of the Transbay Tube is located in West Oakland.

1989 Loma Prieta earthquake to the present

In the Loma Prieta earthquake of 1989, the Cypress Freeway collapsed. 42 people were killed despite rescue efforts by West Oakland residents. West Oakland residents successfully resisted efforts to rebuild the freeway in the same location. With the freeway now removed, West Oakland started to undergo gentrification. Cypress Street was renamed Mandela Parkway, a recently finished wide thoroughfare with a pedestrian path and greenway in its median, including a park commemorating the 1989 earthquake. It is lined with condominiums and new and established businesses. Several of the surrounding warehouses now serve as artist studios. Most notably the former seven acres of facilities for American Steel are now Big Art Studios, a unique facility for large-scale artists. Several pieces of work by the constituent art groups within can be found on display outside the complex. Mandela Gateway, a mixed retail and residential development at the south end of Mandela Parkway, surrounds the West Oakland BART station. The old Victorian houses are being refurbished, and new construction is springing up. The new Central Station project has brought Zephyr Gate, a 130-unit condominium development, and the Pacific Cannery Lofts, a 163-unit development to the area around the train station. The growth of Emeryville on the border of West Oakland, West Oakland's proximity to San Francisco via the San Francisco–Oakland Bay Bridge and BART, and the more affordable rental and home prices, have attracted many new residents.

All content from Kiddle encyclopedia articles (including the article images and facts) can be freely used under Attribution-ShareAlike license, unless stated otherwise. Cite this article:
West Oakland, Oakland, California Facts for Kids. Kiddle Encyclopedia.