Fruitvale (originally Fruit Vale and formerly Brays) is a neighborhood in Oakland, California, United States. It is located approximately 4 miles (6.44 km) southeast of Downtown, and is home to the city's largest Hispanic population, with Hispanics comprising 53.8% of Fruitvale's population. Fruitvale's ZIP code is 94601. It lies at an elevation of 49 feet (15 m).

The name comes from the many fruit orchards (largely apricot and cherry) which dominated the area in the late 19th century. After the 1906 earthquake, the onslaught of refugees from San Francisco caused a population boom, and the unincorporated neighborhood was annexed into the City of Oakland by 1909.

The Fruitvale shopping district is located along International Blvd. (formerly East 14th Street until 1995), from Fruitvale Avenue to 38th Avenue, and is one of the major commercial areas of the city. The area is home to many Latino businesses and hosts several annual cultural events, including a Cinco de Mayo parade and a Día De Los Muertos festival. Before the 1970s the area had the Montgomery Wards West Coast distribution center and retail store located on the downtown Oakland side, roughly opposite East Oakland Hospital, both on East 14th Street. On the San Leandro side, to the south, was the Fruitvale Theater. In between, around 35th Avenue and E 14th St., were the Foodvale Market, a two-story department store, the post office, and a number of other businesses. St. Elizabeth's Catholic Church and St. Elizabeth High School are both located one block north of International Blvd.

During and following World War II, massive numbers of African Americans and Latinos migrated to Oakland, and located in the old part of town, West Oakland. This was followed by the "urban renewal" and the construction of the Nimitz Freeway, bulldozing much of West Oakland. There was then a movement of the dispossessed residents to East Oakland. Fruitvale was in the middle extent of East Oakland, and due its location was heavily settled in by African Americans, and Latinos who by 1990 formed a majority of the district's residents. It wasn't until the late 1980s that the larger Fruitvale District began to attract more Latino residents. African Americans had either relocated to the outer East Oakland area south of Fruitvale or moved out of the city altogether to outer Bay Area suburbs. Fruitvale is predominantly Latino, and is the cultural landmark for the city's Latino population.

In the late 1960s and early 70s the lower part of the Fruitvale district was heavily settled by Chicanos and Latinos. The Chicano Movement that was going on at the time throughout the Southwest also spread to the Fruitvale district. On July 26, 1970, the Oakland Chicano Moratorium protest against the Vietnam War was held at San Antonio Park. One of the speakers was Chicano radical Rodolfo "Corky" Gonzáles. There were also several Chicano school walkouts against the Vietnam War, primarily at local schools like Fremont High School and Oakland High School. The Chicano Movement was very much part of Oakland's history as well, especially the Fruitvale district. Its contributions are still seen throughout the district. 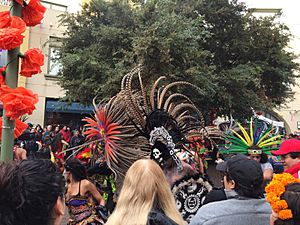 Fruitvale has been experiencing rapid renovation. In 2004, the Unity Council opened the Fruitvale Transit Village. The "Fruitvale Village" has become a model of transit-oriented development, showcasing a mixture of retail and housing integrated with public transportation.

On December 2, 2016, a fire at a warehouse party in Fruitvale killed at least 36 people.

The subsection of the neighborhood adjacent to the Oakland Estuary is called Jingletown, also called "JT" by East Oakland natives. The history of Jingletown begins with its name, originating from a habit of nearby mill workers, largely males of Portuguese and Azorean background, who would jingle the coins from a week's work in their pockets as they walked to display their prosperity. In the late 1950s and 1960s the Portuguese began moving out and Latinos began moving in, becoming the majority of Jingletown's population. About half of Jingletown's population is still Latino but demographics are changing due to gentrification. In 1998, the neighborhood became home to an award-winning affordable housing project that has helped to revitalize the community. In 2003 a building boom began, with several local developers installing hundreds of market-rate condominiums, lofts and townhomes by the Estuary waterfront. The neighborhood remains home to many working artists who live and work in converted lofts. The neighborhood also used to be home to the Institute of Mosaic Art, and one can see many mosaics displayed on buildings sprinkled throughout the neighborhood.

The Fruitvale BART station is located near the shopping district, at the corner of 33rd Avenue and East 12th Street.

All content from Kiddle encyclopedia articles (including the article images and facts) can be freely used under Attribution-ShareAlike license, unless stated otherwise. Cite this article:
Fruitvale, Oakland, California Facts for Kids. Kiddle Encyclopedia.