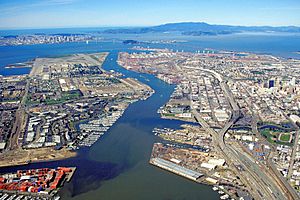 A view over the estuary from above Coast Guard Island. Alameda is on the left, with Oakland on the right and San Francisco Bay in the distance.

The Estuary is spanned by two underwater tubes and three bridges. They are, from west to east: 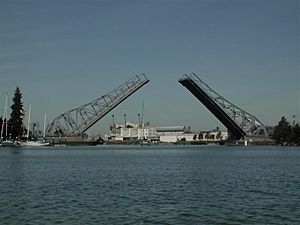 Although the estuary was used by Native American tribes inhabiting the local area since about 4000 BC, the earliest recorded history of the Oakland Estuary dates primarily from events extending back to the 19th century, as detailed in a research study conducted by Earth Metrics for the U.S. Army Corps of Engineers (Earth Metrics, 1990)(Shreffler, 1994). The Oakland Estuary and tributary stream channels were used for shipping transport regularly by the 1850s; early maritime commerce featured movement of lumber and cattle hides. At this time land west of Lake Merritt Slough consisted of undeveloped marshlands. In 1853 the first dredging project of this estuary was initiated, to enable ferry service to San Francisco. By the late 19th century further landside development occurred featuring wharf expansions, railroad service and shipbuilding. The estuary was dredged by the Army Corps of Engineers, making Alameda an island in 1913. Coast Guard island, originally known as Government Island, was formed in 1913 by the dredging project that extended the Oakland Estuary to San Leandro Bay.

All content from Kiddle encyclopedia articles (including the article images and facts) can be freely used under Attribution-ShareAlike license, unless stated otherwise. Cite this article:
Oakland Estuary Facts for Kids. Kiddle Encyclopedia.