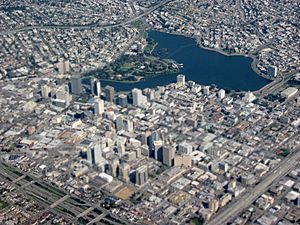 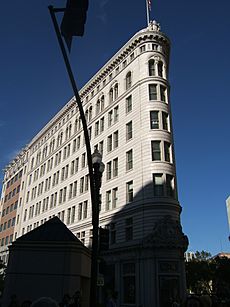 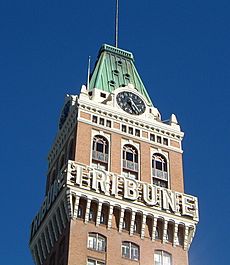 Detail of the Romanesque Revival Tribune Tower. The building serves as a quintessential Oakland landmark, timepiece, and navigation aid, as its unique green roof and massive red neon sign and clock can be seen for miles.

Downtown Oakland is the central business district of Oakland, California, United States; roughly bounded by both the Oakland Estuary and Interstate 880 on the southwest, Interstate 980 on the northwest, Grand Avenue on the northeast, and Lake Merritt on the east.

The Downtown area is sometimes expanded to refer to the industrial and residential Jack London Square and Jack London warehouse district areas, the Lakeside Apartments District, which are a largely residential neighborhood on the west side of Lake Merritt, the Civic Center district, Chinatown, and the south end of Oakland's Broadway Auto Row, an area along Broadway which has historically been used by car dealers and other automotive service businesses. While many consider these areas outside of downtown proper, they are generally considered more geographically proximate to Downtown Oakland than to East Oakland, North Oakland or to West Oakland and are thus sometimes associated with Downtown Oakland.

Downtown Oakland hosts the only celebration of its kind in the nation in memory of the black cowboys who helped settle the American West. The annual parade typically begins on an early October weekend at DeFremery Park in West Oakland en route to Frank H. Ogawa Plaza where judging booths are set up. After an awards ceremony, the parade returns to DeFremery Park, for a celebration.

Land use and points of interest

Downtown Oakland is home to apartment and condominium dwellers, numerous retail businesses, tall modern office buildings, shorter mixed-use historic buildings, the hubs of AC Transit and BART, which has three underground stations, the city's official Entertainment District which includes the historic Paramount and Fox Theatres, nightclubs, and restaurants, the headquarters of Clorox, City Center, a portion of Old Oakland, and a portion of Chinatown.

Downtown includes a portion of the oldest part of the city. The area from the Oakland Estuary inland to 14th Street between West Street and the Lake Merritt Channel was the original site of Oakland, and there are several 19th century houses scattered around the edges of downtown and in Chinatown. The Oakland Museum is located on Oak Street near the southeastern edge of Downtown.

City Hall Plaza is a city park and a "pedestrian plaza" which includes what was once the terminus of San Pablo Avenue where it met Broadway at 14th Street. It also includes 15th Street, which once ran through what is now "Kahn's Alley," past 250 Frank H. Ogawa Plaza building, across Clay Street, through what is now a glass windowed lobby of the California State office building, connecting with Jefferson Street on the building's west side entrance. Motor vehicle traffic has also been excluded from where former city streets, Washington street and 13th street, were once aligned through what is now the Oakland City Center development. Today the area features an outdoor retail mall with pedestrian streets laid out to replicate the original street grid.

Several routes operated by AC Transit pass by or end at Downtown Oakland. These include:

All-Nighter Routes (all routes meet at Broadway and 14th Street)

The "1" line which connects to East Oakland and San Leandro via International Blvd. and California State Route 185 and terminates at the San Leandro BART station, runs through downtown along 12th Street. The transformation of the "1" line into a full scale bus rapid transit corridor is years into the planning process. The most substantial planning alternative proposed for this system would feature articulated buses with five to six doors at boarding platform level, a separated bus-only lane, center median platforms in many areas with proof-of-payment ticket machines to speed boarding, and signalization priority to allow bus drivers to change traffic lights in passengers favor.

Three underground BART stations are located in Downtown: 12th Street/Oakland City Center and 19th Street are both on Broadway, and Lake Merritt is in the eastern area of Chinatown on Madison Street.

Other historic districts have been designated in Old Oakland: the Lakeside Apartments district, Preservation Park, and the Waterfront Warehouse district.

All content from Kiddle encyclopedia articles (including the article images and facts) can be freely used under Attribution-ShareAlike license, unless stated otherwise. Cite this article:
Downtown Oakland Facts for Kids. Kiddle Encyclopedia.