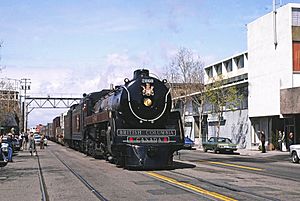 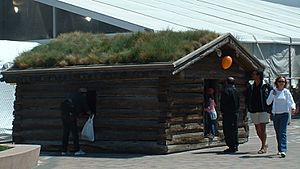 Jack London Square is an entertainment and business destination on the waterfront of Oakland, California, United States. Named after the author Jack London and owned by the Port of Oakland, it is the home of stores, restaurants, hotels, an Amtrak station, a San Francisco Bay Ferry ferry dock, the historic Heinold's First and Last Chance Saloon, the (re-located) cabin where Jack London lived in the Klondike, and a movie theater. A farmer's market is hosted among the retail shops on Sunday mornings. The former presidential yacht USS Potomac is moored at an adjacent slip.

KTVU (Channel 2), the Bay Area's Fox affiliate, has had studios at the Square since it began broadcasting on March 3, 1958, and the offices of the Port of Oakland are located there as well. The Square was also the temporary home of the Oakland Tribune from 1989 to 1996 after the newspaper was forced to abandon the landmark downtown Tribune Tower due to damage it sustained in the 1989 Loma Prieta earthquake.

Jack London Square’s most recent changes are adding more businesses, restaurants and entertainment. Under lead developer Ellis Partners, Jack London Square's new architecture and public spaces are adding to the daytime and nighttime population and use. Recent new components include the 55 Harrison building, a 178,000 square-foot mid-rise by RMW Architects in association with Steve Worthington. The public spaces by SWA Group extended the city to the waterfront by adding accessible waterfront spaces supporting a variety of programs and events from farmers markets to the popular Eat Real local, organic food fest.

All content from Kiddle encyclopedia articles (including the article images and facts) can be freely used under Attribution-ShareAlike license, unless stated otherwise. Cite this article:
Jack London Square Facts for Kids. Kiddle Encyclopedia.