USS Potomac (AG-25), formerly USCGC Electra, was Franklin D. Roosevelt's presidential yacht from 1936 until his death in 1945. On 3 August 1941, she played a decoy role while Roosevelt held a secret conference to develop the Atlantic Charter.

USS Potomac and USS Sequoia are the last two existing U.S. presidential yachts, after USS Williamsburg was scrapped in January 2016. She is now preserved in Oakland, California, as a National Historic Landmark and the only presidential yacht open to the public. 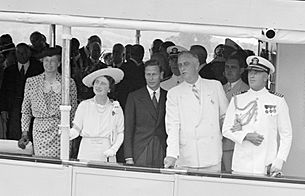 Potomac was built in 1934 by the Manitowoc Ship Building Company, Manitowoc, Wisconsin as the United States Coast Guard Cutter Electra. Electra was a submarine chaser commissioned on October 25, 1934, which served in anti-bootlegging operations. She was chosen to be the new presidential yacht after the Secret Service deemed USS Sequoia a fire hazard. The thought of having a wooden boat that could easily catch fire was not appealing to Franklin Delano Roosevelt who as a child witnessed his aunt burn to death in an oil lamp accident. He also wanted a vessel in which he could move independently and take fishing trips. Electra was officially renamed USS Potomac on January 30, 1936, converted to serve as a presidential yacht and commissioned into the United States Navy on March 2, 1936.

There were approximately $60,000 in upgrades made while converting the ship into a presidential yacht to make the vessel wheel chair accessible and more accommodating. These upgrades included the conversion of the aft smokestack to a false one, a new salon, installation of brass fixtures, the presidential stateroom and bath, three guest cabins and teak decks. Additions to the fantail include a vast leather settee, patio furniture and bullet-proof glass. In the false smokestack, there was an elevator with a pulley system designed so that President Franklin D. Roosevelt could transport himself to the boat deck. The fantail couch is designed so that each sitting party has their legs completely stretched out when sitting back and the president could sit equally as his guests with his legs supported. An antiaircraft machine gun was installed and mounted when the president was on board. Ship ballast was added to the vessel to account for these upgrades. However, the ship still rolled as far as 48 degrees in rough waters, causing many a guest to turn to the rail. The President, being the sailor he was, was affected little.

In the following years, Potomac was heavily used by President Franklin D. Roosevelt, for fishing trips and informal political meetings. USS Potomac served as a place where relationships were built and deals were made. In 1939 the United Kingdom's King George VI and Queen Elizabeth travelled with the Roosevelts aboard Potomac to George Washington's home at Mount Vernon. This was the first visit by British royalty to an American president. The ship now commissioned USS Potomac was categorized as AG-25 which indicates the Navy ship designation of Auxiliary Miscellaneous and number 25th in this designation, known informally as the “Floating Whitehouse”.

It is rumored that the National Labor Relations Act of 1935 was signed on board the ship. Ship logs have been recovered documenting voyages to the Gulf of Mexico and Dry Tortugas, Florida. On March 28, 1941, President Roosevelt delivered a Fireside Chat to the nation from the radio room of USS Potomac in which he stated "the time calls for courage and more courage." After the bombing of Pearl Harbor, the yacht was considered a potential target and used more cautiously by the president. 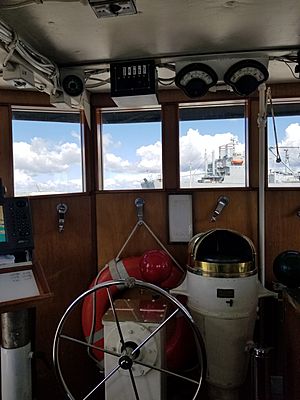 Inside the wheelhouse of USS Potomac

On 3 August 1941, President Roosevelt left Washington to board Potomac at the submarine base at New London. Potomac then sailed for Appogansett Bay where the President did some fishing and entertained guests including Crown Princess Märtha of Norway. Eventually Potomac anchored in Menemsha Bight in Vineyard Sound, where the heavy cruiser USS Augusta already lay at anchor. In the early hours of 5 August Potomac came alongside Augusta and the President and his party transferred to the warship. Augusta then proceeded at high speed to Newfoundland for a clandestine meeting with Winston Churchill. During this meeting, Roosevelt and Churchill agreed to the Atlantic Charter, laying out the principles of the Allied partnership during World War II and setting the scene for the United Nations to plan the post-war peace.

In the meantime and for security purposes, the President's flag continued to be flown from Potomac while she transited the Cape Cod Canal in New England waters. A Secret Serviceman, approximating the President in size and affecting his mannerisms when visible from a distance, played a starring role in the deception. Press releases issued daily from Potomac led all who read them to believe that the President was really embarked in his yacht on a pleasure cruise. After the meetings, Augusta returned the President to Potomac on 14 August.

After President Roosevelt's death, Potomac was decommissioned by the Navy, and returned to US Coast Guard in November 1945.

USS Potomac was decommissioned by President Truman who chose the larger USS Williamsburg as his presidential yacht. Unlike his predecessor, Truman was not a sailor and could not handle the extreme rolling on the Potomac. Being an accomplished classical pianist, Truman also wanted a grand piano aboard his yacht, which the Potomac could not accommodate. The date of the decommission by the Coast Guard was May 23, 1946. After being decommissioned, Potomac remained docked in Cambridge, Maryland and served with the Maryland Tidewater Fisheries Commission as one of forty fishery enforcement boats for the clam, crab, fish and oyster fisherman of the area until 1960. To accommodate President Roosevelt's need for wheelchair accessibility, a concealed elevator had been installed inside what had been one of Potomac's smokestacks to carry the president from the main deck to the boat deck. This smokestack-elevator shaft was removed and now sits in Cambridge at Long Wharf park as a monument to the former president and his 1935 visit to Cambridge on another presidential yacht, USS Sequoia.

Potomac was sold to Warren G. Toone in April 1960 and used as a private ferry boat between Puerto Rico and the Virgin Islands. In 1963, she was registered by Hydro-Capital in Newport Beach, California as a museum ship with call sign WA9710.

In January 1964 she was purchased by Elvis Presley for US$55,000. Presley offered it to the March of Dimes who could not use it. He then gave it to St. Jude Children's Hospital, in Memphis, to sell as a fund raiser. The hospital was able to sell it that same year for US$65,000. The Potomac was then registered to Marie Augustina Pagliasso in 1967 in Sanger, California with the call sign WA9710. Records show Potomac's home port was Los Angeles from 1963 to 1967. In January 1970, the vessel was out of documentation. It is rumored that a certain owner planned on turning the yacht into a floating disco. In 1962, there was a failed attempt to attend World's Fair in Seattle due to engine trouble in Long Beach.

By 1980, she was involved in drug smuggling and was seized by the United States Customs Service in San Francisco, then towed to Treasure Island, where she sank.

The vessel is said to have sunk due to a hull that had not been properly maintained and experienced thinning. The vessel was taking in water for some time before it finally sank alongside Treasure Island.

After being refloated by the U.S. Navy just two weeks later, Potomac was sold to the first and only bidder, the Port of Oakland, for $15,000 and underwent a major restoration.

Potomac was used in June 2011 to film shipboard scenes of the Paul Thomas Anderson film The Master. Actors Joaquin Phoenix, Philip Seymour Hoffman, Amy Adams and others shot scenes aboard the yacht while docked and under way.

The Preservation of the Presidential Yacht Potomac Association

With a $2.5 million government grant, James Roosevelt, FDR's eldest son, began restoring the yacht. In April 1993, the restored Potomac sailed her first cruise as a restored vessel. The yacht became a culturally significant tourist attraction in Oakland when it was open to the public at Jack London Square in Summer 1995.

She is now preserved by the non-profit Potomac Association, and berthed at Jack London Square in Oakland. She is open to dockside tours and regular cruises on the San Francisco Bay. Michael Roosevelt, a grandson of FDR, is the chair of the Preservation of the Presidential Yacht Potomac where a team of volunteers, crew and donors work to uphold the legacy of the historic presidential yacht.

All content from Kiddle encyclopedia articles (including the article images and facts) can be freely used under Attribution-ShareAlike license, unless stated otherwise. Cite this article:
USS Potomac (AG-25) Facts for Kids. Kiddle Encyclopedia.