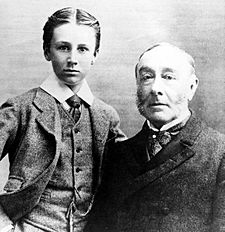 James with his son Franklin in 1895

James Roosevelt I (July 16, 1828 – December 8, 1900) was an American businessman, politician, horse breeder, and the father of Franklin D. Roosevelt, who became the 32nd president of the United States.

All content from Kiddle encyclopedia articles (including the article images and facts) can be freely used under Attribution-ShareAlike license, unless stated otherwise. Cite this article:
James Roosevelt Facts for Kids. Kiddle Encyclopedia.