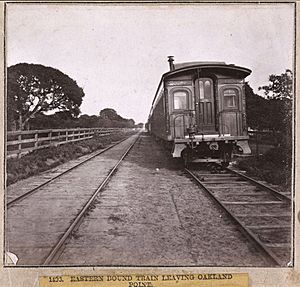 Oakland Point, or Gibbon's Point, was a small promontory formerly on the eastern shore of San Francisco Bay in West Oakland, California. It was located in the vicinity of what is now the Port of Oakland shipping terminal.

Oakland Point was originally named Gibbon's Point, for an early American settler who constructed a small wharf there. The wharf and adjacent properties were acquired by the Central Pacific Railroad in 1868, which subsequently constructed the Oakland Long Wharf, its own massive terminus for the Transcontinental Railroad. The Long Wharf was later acquired and re-engineered by the Southern Pacific Railroad in the 1880s as the Oakland Mole, obliterating Oakland Point.

In addition to the wharf, the Central Pacific had a huge rail yard in the area which also later became one of the main rail yards of the Southern Pacific. Today, the same rail yard is operated by the Union Pacific Railroad.

The neighborhood near Oakland Point was initially known by the same name, although its identity was soon merged with the rest of West Oakland, the name by which it was known from the early 20th century onward. It was a thriving socially and ethnically mixed neighborhood from the late 19th century through the 1930s.

The name "Oakland Point" has been recently revived as part of the effort to re-develop West Oakland. It has been adopted by a community group calling itself the "Prescott-Oakland Point Neighborhood Association". Part of the redevelopment of the area includes, appropriately, the partial restoration of the historic 16th Street Station. The station will however, not be put to any railroad use, but will become the centerpiece of a housing development known as "Central Station".

All content from Kiddle encyclopedia articles (including the article images and facts) can be freely used under Attribution-ShareAlike license, unless stated otherwise. Cite this article:
Oakland Point, Oakland, California Facts for Kids. Kiddle Encyclopedia.