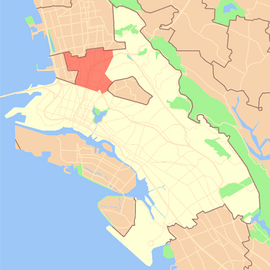 Location of North Oakland in the City of Oakland. 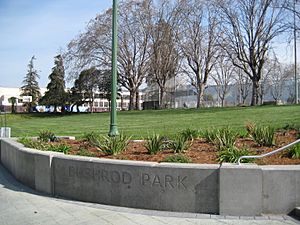 North Oakland is a region in Oakland, California, United States, bordered by Downtown Oakland, Oakland Hills, and the adjacent cities of Berkeley, Emeryville and Piedmont. Annexed to Oakland in 1897. It is known as the birthplace of the Black Panther Party and is the childhood home of both the co-founders, which are Dr. Huey P. Newton and Bobby Seale. It is also the birthplace and childhood home of Sue Draheim, internationally recognized fiddler.

According to a project commissioned by the city in 1982 to define Oakland's neighborhoods for landscaping purposes, North Oakland comprises the following neighborhoods:

All content from Kiddle encyclopedia articles (including the article images and facts) can be freely used under Attribution-ShareAlike license, unless stated otherwise. Cite this article:
North Oakland, Oakland, California Facts for Kids. Kiddle Encyclopedia.