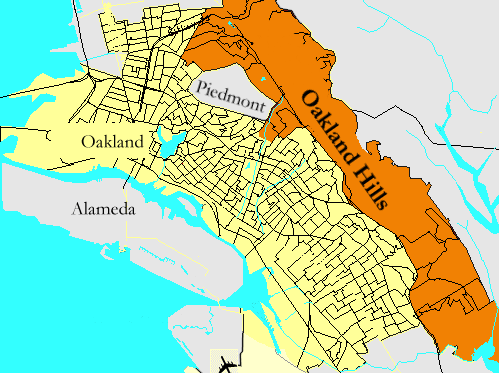 The Oakland Hills (in gold) lie between Piedmont, The Berkeley Hills, the East Bay Regional Park District, and the rest of Oakland.

Oakland Hills is an informal term used to indicate the city neighborhoods lying within the eastern portion of Oakland, California. The northernmost neighborhoods were devastated by the Oakland firestorm of 1991.

"Oakland Hills" is most commonly an informal name for that section of the Berkeley Hills range which extends along the eastern side of Oakland, California. In recent decades, it has become the more common popular term although it remains "officially" incorrect among geographers and gazetteers. Before the establishment of the University of California in Berkeley, the range was called the Contra Costa Hills.

To add confusion, the common usage often includes another officially unnamed ridge which runs in front (west) of the Berkeley/"Oakland" Hills, as well as the linear valley enclosed between the two ridges in the Montclair District along State Route 13. This other ridge, a shutter ridge created by the Hayward Fault, lends its informal name, "Rockridge", only to the district of Oakland at its northwest end, although it extends southeast to the junction of Highway 13 and I-580 in East Oakland and includes most of the small residential community of Piedmont, California. Plant communities are diverse, ranging from oak-grassland savanna and chaparral on sunny exposed slopes, to woods of oak, madrone, bay laurel, pine and redwoods in shady canyons.

The Oakland Hills neighborhoods comprise the highest elevations within the city's land area, following the alignment of the hills and the central section of the Hayward Fault Zone. The area includes all of Oakland lying east of State Route 13 and east of I-580 south of its junction with Route 13. The area includes Upper Rockridge, Oakmore, Montclair and Mountain View Cemetery. The Oakland Hills touch the eastern border of Piedmont, California and include a section of the Claremont neighborhood, the northern part of which lies within the city of Berkeley. The Oakland Hills also include the northern section of Lake Chabot Regional Park and borders Robert Sibley Volcanic Regional Preserve, Huckleberry Botanic Regional Preserve, Redwood Regional Park, and Anthony Chabot Regional Park; all part of the East Bay Regional Park District. 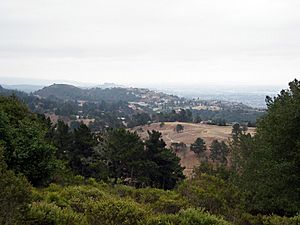 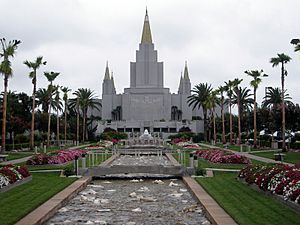 Several popular cultural sites and events are located in the Oakland hills:

All content from Kiddle encyclopedia articles (including the article images and facts) can be freely used under Attribution-ShareAlike license, unless stated otherwise. Cite this article:
Oakland Hills, Oakland, California Facts for Kids. Kiddle Encyclopedia.