The Oakland Zoo is a zoo located in the Grass Valley neighborhood of Oakland, California, United States. Established in 1922, it is managed by the Conservation Society of California, a 501(c)(3) non-profit organization dedicated to the conservation of wildlife both locally and globally. The zoo is home to over 850 native and exotic animals. It's recognized for its outstanding animal care, particularly its elephant care program, and for its Leed-certified, 17,000 square foot, state-of-the-art veterinary hospital—the largest wild animal veterinary facility in Northern California.

On July 12, 2018, the Oakland Zoo opened the California Trail to the public, focusing on this state's remarkable native wildlife—both past and present.

Naturalist Henry A. Snow established the Oakland Zoo in 1922 on 19th St and Harrison St in downtown Oakland. Snow Park now occupies the site of the zoo's first home. Over the years the zoo relocated several times: to Sequoia Park, Joaquin Miller Park and finally in 1939 to Durant Park. Under Joseph R. Knowland, chairman of the California State Park Commission, California purchased the land and in 1950 renamed the park to Joseph Knowland State Arboretum and Park.

Although EBZS has always been involved with zoo projects and operations to some extent, it was not until after major development of the zoo from 1958 to 1965 that the EBZS's role increased dramatically. Through their efforts, money was raised to develop the African Veldt (1965), the Australian Outback (1975) and the original tiger exhibit (1980). In 1977, the EBZS purchased the food, rides and Children's Zoo concessions.

In 1982 the EBZS entered into an agreement with the City of Oakland to manage the zoo and develop it under non-profit status. In 1985, Joel Parrott, DVM, was hired as executive director of the Oakland Zoo.

The East Bay Zoological Society was renamed the Conservation Society of California in August 2017 to better reflect the Zoo's evolving purpose and mission in its commitment to conservation.

Many new exhibits have been created, including those for the hamadryas baboons and the chimpanzees. A new, spacious elephant exhibit was built in 1987. The current sun bear exhibit was finished in 1995 and was featured on Animal Planet Ultimate Zoos. The white-handed gibbons now live on a lush island in the heart of the Rainforest. The African Savannah, with camels, lions, elephants, meerkats, hyenas and more, was completed in 1998.

The Education Center opened its new doors in 1999 with the new main entrance followed soon after in summer 2001 (see picture). In autumn of 2001, a new squirrel monkey exhibit opened along with a larger, newly renovated tiger exhibit. In the spring of 2007, the four dromedary camels were moved to a larger, fenced enclosure uphill from their old enclosure.

In 2012, a fully funded LEED-certified Veterinary Hospital opened, followed by the opening in 2013 of the Oakland Zoo Biodiversity Center, and the 2014 inauguration of the Condor Recovery Center at Oakland Zoo. Each of these projects has improved care of the zoo's animals as well as conservation of the species in the wild.

California Trail represents $70 million out of an $81 million multi-phase zoo development. Guests travel to the Trail via an aerial gondola from the existing zoo. Along the trail, they encounter various animals, such as American bison, American black bears, California condors, eagles, gray wolves, grizzly bears, jaguars and mountain lions. A half-acre California Kids' Zone introduces young children and their families to California wildlife and habitats through themed play structures. Inside an interpretive center with a wall-length window into the grizzly habitat, visitors explore California's diverse habitats, step into the shoes of conservation researchers, and find their place as a member of a community of people taking action for California's wildlife. The project was designed by Noll & Tam Architects and built by C. Overaa & Co.

‍“California Trail is just the latest example of the Oakland Zoo’s leadership in captive animal welfare, and its commitment to providing natural and enriched environments to promote species-typical behaviors for captive wildlife. California Trail is a model for other zoological facilities, sending the critical message that zoos have an important role to play in the rescue, rehabilitation, and care of wildlife...Oakland Zoo has long prioritized common sense and welfare, and PETA looks forward to continued collaboration on improving the welfare of captive wildlife across the U.S.” -Brittany Peet, Esq., Director, Captive Animal Law Enforcement PETA Foundation

In the summer of 2005 the 3-acre (12,000 m2) Valley Children's Zoo opened with spacious new animal exhibits along with plenty of interactive play-structures for children. The ring-tailed lemurs, century old Aldabra tortoises, the interactive Goat and Sheep Contact Yard along with the river otters can be found in the Children's Zoo. The popular American alligators, the bats, the pot-bellied pigs, the Old-World rabbits along with the Bug Room, and the Reptile and Amphibian Discovery Room are also in the Children's Zoo. One of the most interesting and popular features with the smaller children are the brass insects embedded in the concrete walkways, which were installed as a form of public art.

The zoo is home to over 700 native and exotic animals and is a member of the AZA. The following animals are on exhibit to the public: 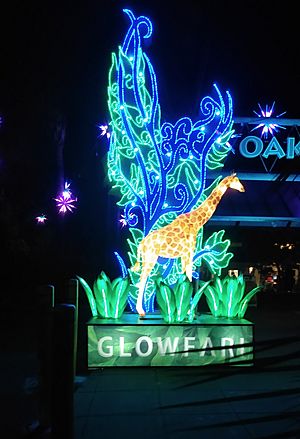 Glowfari is a light even hosted by the Zoo from February 12 to March 13, 2021. It is a light show featuring larger-than-life lanturn animals. The path is 1 mile long, and features over 100 animals, and over 800 other light displays. There is 3 different worlds: Aquatic, Ecosystem/Food chain, and Jurassic.

All content from Kiddle encyclopedia articles (including the article images and facts) can be freely used under Attribution-ShareAlike license, unless stated otherwise. Cite this article:
Oakland Zoo Facts for Kids. Kiddle Encyclopedia.