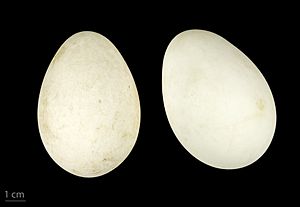 The Egyptian goose (Alopochen aegyptiacus) is a member of the duck, goose, and swan family, Anatidae. It lives in Africa, south of the Sahara and the Nile River Valley.

Egyptian geese were thought to be sacred by the people in Ancient Egypt. They appeared in much of their artwork. They have been raised for food and bred in parts of Africa since they were domesticated by the ancient Egyptians. Because of their popularity as an ornamental bird, they often escape. Small feral populations have become established in Western Europe.

All content from Kiddle encyclopedia articles (including the article images and facts) can be freely used under Attribution-ShareAlike license, unless stated otherwise. Cite this article:
Egyptian goose Facts for Kids. Kiddle Encyclopedia.