Mastigoproctus giganteus, the giant whip scorpion, also called the giant vinegaroon or grampus, is a species of whip scorpions in the family Thelyphonidae.

This species can grow to be 40–60 millimetres (1.6–2.4 in) long, excluding the tail. They have six legs used for movement, two long antenniform front legs that they use to feel around for prey and detect vibrations, and two large pedipalps modified into claws that they use to crush their prey. They have a long, thin, whip-like tail, the origin of the common name whipscorpion. From the base of this tail they can spray a substance composed of 85% acetic acid in order to defend themselves. Acetic acid is the main component of vinegar, so the spray smells strongly of vinegar, leading to the common name "vinegarroon".

It lives in the southern US and in Mexico. Mastigoproctus giganteus preys on various insects, worms, and slugs. It is an efficient predator that feeds on a variety of Arthropods, primarily insects such as cockroaches and crickets, as well as millipedes and other arachnids. It has even been recorded feeding on small frogs and toads. It uses its large pedipalps to hold prey, while the chelicerae tear and bite the prey. 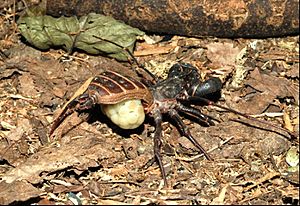 This species is sold in the exotic animal trade as pets.

All content from Kiddle encyclopedia articles (including the article images and facts) can be freely used under Attribution-ShareAlike license, unless stated otherwise. Cite this article:
Giant whip scorpion Facts for Kids. Kiddle Encyclopedia.