The brown anole (Anolis sagrei), also known commonly as the Bahaman anole or De la Sagra's anole, is a species of lizard in the family Dactyloidae. The species is native to Cuba and the Bahamas. It has been widely introduced elsewhere, by being sold as a pet lizard, and is now found in Florida and as far north in the United States as southern Georgia, Texas, Louisiana, Mississippi, Alabama, Hawaii, and Southern California. It has also been introduced to other Caribbean islands and Taiwan in Asia.

This species is highly invasive. In its introduced range, it reaches exceptionally high population densities, is capable of expanding its range very quickly, and both outcompetes and consumes many species of native lizards. The brown anole's introduction into the United States in the early 1970s has altered the behavior and negatively affected populations of the native Carolina anole (Anolis carolinensis, also known as the green anole), which have since generally been relegated to the treetops.

The brown anole is normally a light brown color with darker brown to black markings on its back, and several tan to light color lines on its sides. Like other anoles, it can change color, in this case a darker brown to black. Its dewlap ranges from yellow to orange-red. The males can grow as large as their male Carolina anole counterparts, around 17.8–20.3 cm (7.0–8.0 in) long, with some individuals topping 22.9 cm (9.0 in). The females are also around the size of female Carolina anoles: 7.6–15 cm (3.0–5.9 in). The male brown anole's head is smaller than that of the male Carolina anole. Also, the brown anole's tail has a ridge that travels all the way up to behind the head, a feature that the Carolina anole lacks. Female brown anoles can be distinguished by a light brown stripe that runs over their back, a feature that males lack.

Brown anoles live on average 4–5 years in the wild but have been known to survive up to 8 years in captivity, though reaching this age is uncommon. They reach sexual maturity one year after hatching, and typically breed in the summer months (depending on the climate) from March-April to August-September. After breeding, the female will lay 1–2 eggs every 7–14 days, burying and then abandoning them. If viable, the eggs will hatch about seven weeks later, and the hatchlings that survive do so entirely on instinct.

Brown anoles molt in small pieces, unlike some other reptiles, which molt in one large piece. Anoles may consume the molted skin to replenish supplies of calcium. In captivity, the molted skin may stick to the anole if humidity is too low. The unshed layer of skin can build up around the eyes, preventing the lizard from feeding and may lead to starvation. This can be prevented by maintaining high humidity.

Brown anoles feed on small arthropods such as crickets, moths, ants, grasshoppers, cockroaches, mealworms, spiders, and waxworms. They may also eat other lizards, such as skinks and the Carolina anole, lizard eggs, and their own molted skin and detached tails. If near water, they eat aquatic arthropods or small fish – nearly anything that will fit in their mouths. 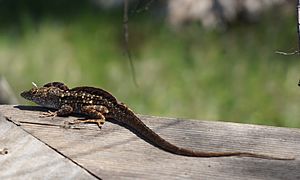 As a defense mechanism, the brown anole can detach most of its tail when pursued or captured (autotomic). The piece that breaks off will continue to move, possibly distracting the predator and allowing the anole to escape. The lost tail will partially regrow. If provoked, the brown anole will bite, urinate, and defecate. Also some brown anoles may do a short hiss if caught, injured, or fighting. Predators include rats, snakes, birds and many larger animals such as cats.

Recent work in experimentally introduced populations in the Bahamas has shown that body size in the brown anole may not be affected by predation, as was previously thought.

Anoles use visual cues as their primary signaling mode.

All content from Kiddle encyclopedia articles (including the article images and facts) can be freely used under Attribution-ShareAlike license, unless stated otherwise. Cite this article:
Brown anole Facts for Kids. Kiddle Encyclopedia.